The WSOP on ESPN: The November Nine is Set! 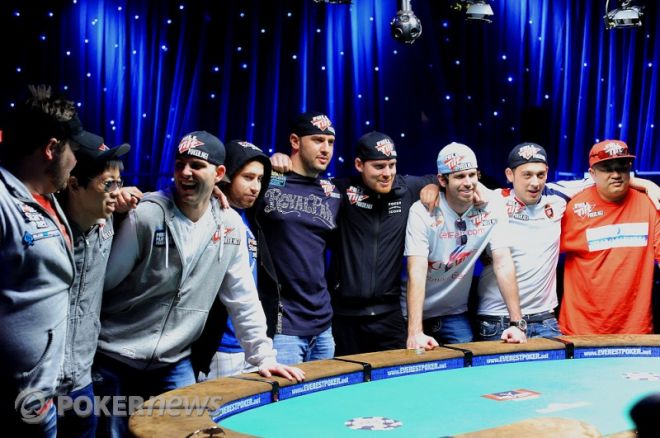 Tuesday’s ESPN broadcast of the 2010 World Series of Poker featured the continuation of Day 8 with just 18 players returning to play down to the November Nine. The final 18 players and their chip counts at the top of the broadcast were:

and raised to 480,000 from the hijack. Scott Clements picked up

on the button and instantly moved all-in for nearly five million. In the big blind,Matt Jarvis held

and moved all-in over the top, driving Mizrachi out of the hand.

Clements was in bad shape as the flop came down

, and suddenly he needed a queen to stay alive. The

river were no help and Clements was eliminated from the tournament in 18th place ($396,967)

Baker Cooked: Jonathan Duhamel raised to 500,000 from middle position with

, and Matt Affleck called from the hijack with

in the big blind and also came along for the ride. The flop fell

and Baker checked to Duhamel, who bet 1.275 million. Affleck mucked and Baker moved all-in with his flush draw for 4.975 million. Duhamel made the call, and Baker’s tournament life was on the line. The dealer burned and turned the

Down to Fifteen: Ben Statz moved all in preflop with

and received a call from Matt Jarvis who held

Habib Doubles Through the Grinder: Action folded to Michael Mizrachi in the cutoff and he promptly moved all-in for 2.7 million with his

. Hasan Habib looked down at

and made the call for his tournament life. The flop came down

, giving Habib a set. The turn was the

and Mizrachi was left drawing dead. The

was put out on the river as Habib doubled to 2.7 million, and Mizrachi was left with just seven big blinds.

from the cutoff, and Matt Affleck reraised to 1.55 million with

from the button. Action folded back to Duhamel who reraised to 3.925 million. Affleck opted to make the call and the flop came down

Duhamel checked to Affleck who bet 5 million. After a call, the turn came the

. Once again, Duhamel checked to Affleck, who moved all-in for 11.63 million. Duhamel tanked before making the call and creating a pot worth nearly 42 million. The players and fans were on their feet as the dealer burned and put up the

, sending gasps throughout the Amazon Room. Affleck buried his face in his hat, clearly emotional, as he was eliminated in 15th place ($500,165).

, and John Racener called with the

Blind Versus Blind: Action folded to John Dolan in the small blind and he moved all-in with

. Duy Le was in the big blind and called for his tournament life with

. Le was in great shape until the flop came down

on the turn was no help and neither was the

against Jonathan Duhamel's the

, leaving Levy in a world of hurt. The

on the turn gave him some hope, but the

Down to Ten: Jonathan Duhamel was under the gun and raised to 750,000 with

. Pascal LeFrancois called from the button with

and Joseph Cheong made it 2.55 million from the small blind with

. Duhamel mucked and LeFrancois responded by moving all in for 7.645 million more! Cheong snap-called and was in great shape.

, giving him a pair of jacks. The

on the turn quickly put an end to the hand, and the

Bubble Poker: Joseph Cheong raised to 950,000 in early position with

only to have John Dolan reraise to 2.575 million directly behind with

. Action folded back to Cheong who four-bet to 5.95 million. Dolan then moved all in for almost 22 million more, putting the pressure back on Cheong, who cut his losses and conceded the hand.

November Nine Set: With only one more elimination needed to reach the November Nine, Jonathan Duhamel looked down at

and raised to 1.225 million from early position. Brandon Steven was next to act and moved all-in for about 4.5 million with his

. Matt Jarvis then peered down at

from the hijack and called. Everyone else got out of the way and it was heads-up to the flop.

Steven was essentially racing on poker’s biggest bubble. If he doubled, he would be in great shape to make the November Nine; if not, he would be eliminated. The

made the latter the most likely outcome, and the

on the turn seemed to solidify that. It was down to the river as the dealer burned and revealed the

. Steven was eliminated in 10th place ($635,011) while the remaining players and the crowd erupted in celebration.

The Final Table of the 2010 World Series of Poker Main Event will air next Tuesday on ESPN. Check your local listings.