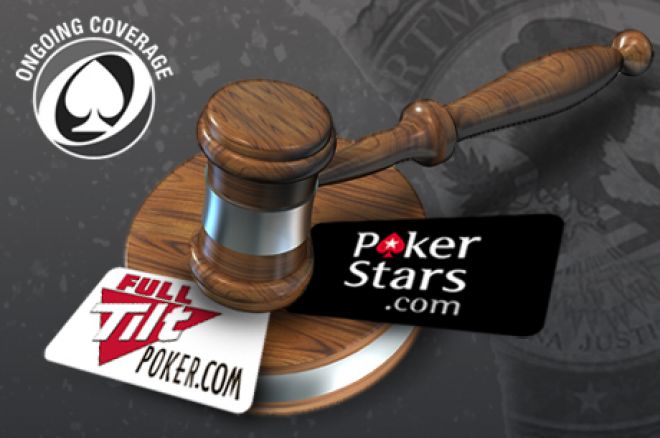 Group Bernard Tapie Managing Director Laurent Tapie confirmed Tuesday that negotiations to purchase Full Tilt Poker's assets from the Department of Justice have officially ended, a move that could potentially pave the way for PokerStars to purchase the assets of its former competitor.

According to a statement issued by Groupe Bernard Tapie, the drawn-out deal with the DOJ fell through due to "unresolvable" legal complications and failure to agree on player repayment plan. Tapie was supposedly in the final stages of negotiations with the DOJ and preparing to re-launch the embattled poker site in the near future.

"GBT proposed a plan that would have resulted in immediate reinstatement of all ROW (rest of the world) player balances, with a right to withdraw those funds over time, based on the size of the player balance and the extent of the player’s playing activity on the re-launched site," GBT said in the statement. "All players would have been permitted complete withdrawal of their balances, regardless of whether they played on the site, by a date certain, and 94.9 percent of ROW players would have been fully repaid on Day 1. DOJ ultimately insisted on full repayment with right of withdrawal within 90 days for all players– a surprise demand made in the 11th hour, after months of good-faith negotiations by GBT."

The complicated sale of Full Tilt Poker had dragged on since last November when GBT agreed to purchase the forfeited FTP assets from the DOJ for $80 million. In the end, Tapie says the purchase price, along with the substantial amount of cash needed to re-launch FTP, were "too substantial to overcome."

In addition to that shocking news, rumors began swirling Tuesday that PokerStars had swooped in and purchased Full Tilt Poker's assets for $750 million from the DOJ. Following initial rumors started in a TwoPlusTwo thread, ChiliGaming CEO Alex Dreyfus posted via Twitter that $330 million will go toward the repayment of players, while the rest will settle the outstanding charges against PokerStars.

Terms of the deal have not yet been confirmed. PokerNews reached out to the Department of Justice on Tuesday, but a spokesperson declined to comment.

Groupe Bernard Tapie regrets to announce that, after seven months of intensive work, our efforts to obtain final approval of the United States Department of Justice of the agreement to acquire the assets of Full Tilt Poker have ended without success.

Ultimately, the deal failed due to two major issues.

1. The parties could not agree on a plan for repayment of ROW players. GBT proposed a plan that would have resulted in immediate reinstatement of all ROW player balances, with a right to withdraw those funds over time, based on the size of the player balance and the extent of the player’s playing activity on the re-launched site. All players would have been permitted complete withdrawal of their balances, regardless of whether they played on the site, by a date certain, and 94.9% of ROW players would have been fully repaid on day 1. DOJ ultimately insisted on full repayment with right of withdrawal within 90 days for all players– a surprise demand made in the 11th hour, after months of good-faith negotiations by GBT.

2. The legal complications surrounding the deal – specifically, questions surrounding the legality of the forfeiture under non-US laws – also proved unresolvable. All of the key assets of the FTP companies reside outside of the United States. A non-US court well might regard the purported forfeiture as a “fraudulent transaction” and declare it invalid or deem the acquirer of the assets responsible for all of those creditor obligations.

Given the $80 million purchase price, and the substantial amount of cash needed to relaunch FTP, those issues ultimately proved too substantial to overcome.

GBT is very conscious of the hopes it has created — among FTP employees that they will retain their jobs, among FTP players that they will recover their balances, and among the entire poker community that the world's finest poker platform will be relaunched and bring a needed added element of competition to a world market that today is fully dominated by a single operator.

GBT cannot accept the end of those hopes. For that reason, unless a concrete and legally viable solution is found in the very coming days to save the employees and repay the players of FTP, we will move to our own plan of action.

We understand from press reports that the DOJ may have entered into an agreement with PokerStars pursuant to which PokerStars will acquire the FTP assets. If accurate, we can only assume that PokerStars determined that it was willing to accept these legal and financial risks in order to resolve its own legal situation with DOJ.

If a PokerStars acquisition of FTP means that all FTP players will be fully repaid immediately, we are very happy for the players, as their final and full repayment has always been our priority. We only regret that such a deal would signal further consolidation of a poker market already dominated by a single player — an outcome that may raise antitrust concerns and that, in the long run, is probably not good for players and for the whole online poker industry.

April 24, 2012 14:45 p.m. PDT:PokerNews caught up with GBT attorney Behnam Dayanim Tuesday afternoon and asked him some follow-up questions regarding the statement.

You mentioned in your statement that there were two major issues that caused the deal with the DOJ to fall through. Can you talk a little bit about the second concern regarding the legality of the forfeiture under non-US laws?

The issue there is that this company's assets are all located outside of the United States. By forfeiting the assets, all the company will be left with is liabilities. That in turn puts them in position where a foreign court might say, 'look, these companies have creditors and these creditors have received nothing in return for the forfeiture of these assets. That transaction therefore is unlawful.' I either might just refuse to recognize it, or I'd say that the acquirer of the assets also gets stuck with the liabilities.

Why do you think the DOJ implemented the 90-day payback deadline?

I assume that they wanted to make sure the Rest of the World (ROW) players were paid back quickly. But of course, if there's no deal, then nobody gets paid back.

How long do you think it would have taken for GBT to repay players?

What we had agreed to do was 1.) Reinstate player balances immediately so players could use their balances on the site, and 2.) We said we would allow for a withdrawal of those balances over a period of time that would depend on a number of factors. The overwhelming majority of players would have been paid back within a year — a substantial majority of them immediately. Only a few of the large balances would take longer.

The AGCC scheduled a license hearing for a Full Tilt Poker subsidiary next month. How close was GBT in terms of re-launching FTP?

We were ready to go. We thought we had a deal and all that was left to work out were a few technical details. Laurent Tapie was spending a lot of his time in Dublin. The company was re-hiring, and we were moving forward with the Alderney regulators to have the license re-activated. We were moving ahead. We thought we were going to be launching the new site soon.

As you know, reports surfaced today that PokerStars has agreed to buy Full Tilt Poker's assets. Was GBT aware that there were other negotiations going on?

Well, I can't really say what we were and were not aware of. I don't even know whether that report is true or not. It very well could be true and PokerStars decided to take on the additional risk that I described.

Is Groupe Bernard Tapie still interested in the online poker space even without FTP?

We'll bring you more on this story as it develops. Follow PokerNews on Twitter for up-to-the-minute news.