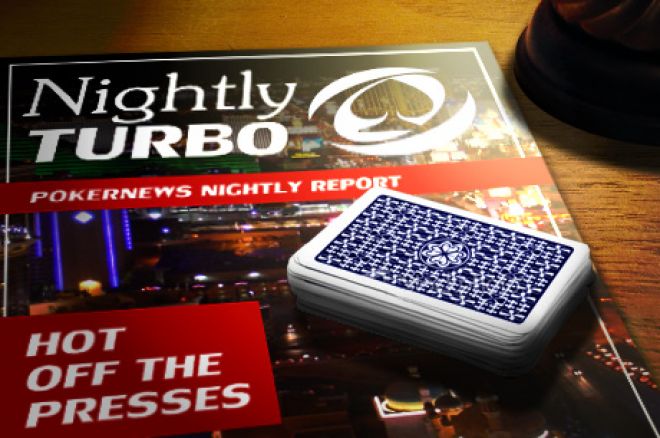 Need a job? Can you relocate to Ireland? Maybe Full Tilt Poker can help you out. In this edition of the Nightly Turbo, we're bringing you the surprising job listings found on an Irish website, a Super High Roller event at the upcoming EPT Grand Final in Monaco, and more.

Phil Hellmuth won the inaugural PokerNews Fan Bracket. But did he win it fairly? Rich Ryan discusses that and more in his latest Five Thoughts piece.

Online poker found a new backer last week. Matthew Kredell uncovers why the Fraternal Order of Police sent a letter to Congress requesting legalized and regulated poker in the U.S.

We don't want to get your hopes up just yet, but it appears that Full Tilt Poker's reported plans to relaunch later this year are in motion. On Tuesday, Pocket Kings Ltd, the technology and marketing arm of Full Tilt Poker, placed several job listings at an Irish employment website. Full Tilt Poker's headquarters are in Dublin, Ireland.

The listings, which can be found at jobs.ie, are for customer service supervisors and representatives across a wide range of languages, including Romanian, Hungarian, Dutch, Portuguese, German, Italian and Spanish. Most of the listings contain the following text:

"Pocket Kings is hiring and has an urgent requirement for experienced multilingual Customer Service representatives. With an attractive salary, these 2-3 month contract roles may become permanent and offer an exciting opportunity to join a vibrant and energetic company."

Wicked Chops Poker reported last month that Full Tilt Poker is in “full ramp-up mode” for a re-launch. Groupe Bernard Tapie, the French investment firm trying to buy the online poker company, has been working diligently on re-acquiring a gaming license that was stripped away from FTP last year. Laurent Tapie recently said that the site could be operating again as early as this month.

To take a closer look at the job listings, check out jobs.ie.

We're still three weeks away from the European Poker Tour Grand Final in Monaco, but PokerStars announced Tuesday that 20 players have already registered for the €100,000 Super High Roller event, which begins on April 25.

The tournament, one of 37 on the slate from April 23 through May 1, will be the first ever six-figure buy-in poker tournament on European soil. The prize pool is already guaranteed to be $2 million, and many more players are expected to take part in the event.

“We’re extremely pleased to have such a fantastic response to the first ever European Super High Roller event and we look forward to welcoming some of the biggest names in international poker," said EPT President Edgar Stuchly. "It’s fitting that such an historic tournament is taking place in Monaco — the spiritual home of high stakes gaming. I’m expecting that it will be an action-packed tournament and will prove worthy of its place in poker history.”

The list of players who have already put up the €100,000 buy-in includes the following:

More info can be found at europeanpokertour.com.

Twelve hours. A little more than 5,000 hands. That's all it took for Viktor "Isildur1" Blom to scoop $500,000 from Isaac "philivey2694" Haxton in the latest PokerStars SuperStar Showdown.

The two players hit the virtual felts on Saturday and began playing four tables of heads-up $200/400 no-limit hold'em with one goal in mind: take it all. Each began with half a million dollars and, after three separate sessions, Blom had the full $1 million in front of him, effectively ending the match.

Blom had lost the two prior matches to Haxton, but his recent win pushes his over SuperStar Showdown record to 10-4. His profit in those matches is now $1,034,090.

For an in-depth look at the $1 million match, check out the recap by Chad Holloway.

New Jersey took another step toward online gambling on Tuesday when a state Senate committee passed a bill that would allow for online wagering on casino games, including poker.

New Jersey has made several attempts to push an online gambling bill through the legislature in the past year, but each of the measure was shut down by Gov. Chris Christie. However, a change in opinion by the Justice Department could open the door for New Jersey to offer online gambling to residents outside state lines.

The next step for the bill is a full Senate and Assembly vote. Read more at PokerNews.com.

Get Ready for the Melbourne Poker Championships

It may not have the flair and panache of the Aussie Millions, but the popular Melbourne Poker Championships will be returning to the renowned Crown Poker Room in May.

The 11th installment of the series will run from May 3 through 14, 2012, featuring 10 tournaments, including two championship events. The first event on the schedule will be $550 buy-in Joe Hachem Deepstack Series. The other championship event is the $1,100 Melbourne Poker Championships Main Event. Last year, Scott Peels bested a field of 502 players to collect the Main Event title and $114,230.

One exciting twist to the schedule is Event No. 3. The $300 no-limit hold'em turbo event will be open to teams of two or three players. Teammates will then be able to change after each orbit on their table.

Donald Trump still has plans to stamp his colossal brand to an online poker room in the U.S. The Times reported Monday that Trump Entertainment Resorts and online gaming company 888 Holdings are in discussions to offer online poker once the activity is legalized and regulated in the states.

Trump announced last year that he and New York hedge-fund manager Marc Lasry planned to form an Internet gaming company if and when online gambling is legalized in the U.S. 888 would be an ideal choice; the company runs the fourth largest poker room in has already partnered with Caesars Interactive Entertainment and applied for a gaming license in Nevada.

We have more on the story at PokerNews.com.

Griffin Benger and Ben Willinofsky were among the players competing for the final seat in this week's PartyPoker Premier League V Main Event. The two online superstars played a huge hand on Tuesday and explained their thought process afterward.

Willinofsky went on to defeat Melanie Weisner heads-up for the last seat into the $125,000 buy-in event that begins on Wednesday. For updates from the qualifier in Vienna, visit the PartyPoker Blog.