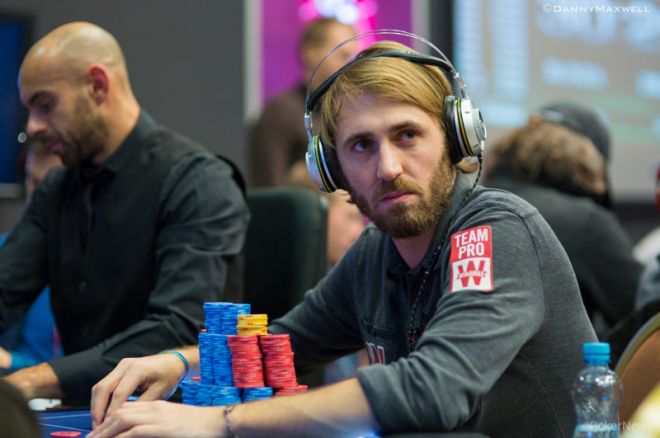 Season 10 of the European Poker Tour continued on Sunday with Day 3 action from the EPT10 Prague Main Event. For the past few days, the Czech Republic’s largest city has played host to the largest field in EPT Prague history (1,007 players), but the final day in the weekend saw the returning 189 players reduced to the final 61.

During five 90-minute levels of play, the money bubble burst when just 151 remained, and then the in-the-money finishes piled up. By the end of the night, Ludovic Lacay emerged as the chip leader with 1.7 million, though some stiff competition also advanced including Ole Schemion and Jonathan Little.

Action resumed in Level 15 (1,500/3,000/400), and it didn’t take long for one of the most accomplished players in the field to fall. In one of the first hands of the day, Team PokerStars Pro David Williams was crippled when his pocket kings were cracked when his opponent made a pair of aces on the river.

The next hand there was a raise in front of Williams to 6,500 and he shoved his last big blinds in. The call that followed was quick and Williams would soon find out his

Others who fell shy of the money were Martin Staszko, Erik Scheidt, Marcin Wydrowski, Sam Cohen, Rui Sousa, Bolivar Palacios, and Alexander Lakhov, who was sent to the rail as the bubble boy.

It was a big flip for the chip lead, and according to the PokerNews Odds Calculator, Chidwick was a 56.55% favorite while Lehavot would survive 43.03% of the time. The

turn knocked him down even further to 13.64%, meaning he needed either an ace or king on the river to stay alive. On the other hand, Chidwick would win 86.36% of the time, and as fate would have it this was one of those times as the

river improved him to a full house.

Two other players to fall before the end of the night were Team PokerStars Pros Eugene Katchalov and Jonathan Duhamel.

which was superior to Katchalov's

board didn't help Katchalov and he exited in 71st place. Duhamel, the last Team PokerStars Pro standing, would follow him out the door in 65th place.

Day 4 will kick off at Noon local time on Monday, which is also when the €10,000 High Roller gets under way. Of course the PokerNews Live Reporting Team will be on hand to bring you updates from both.

Until then, check out this video of poker pros singing songs: