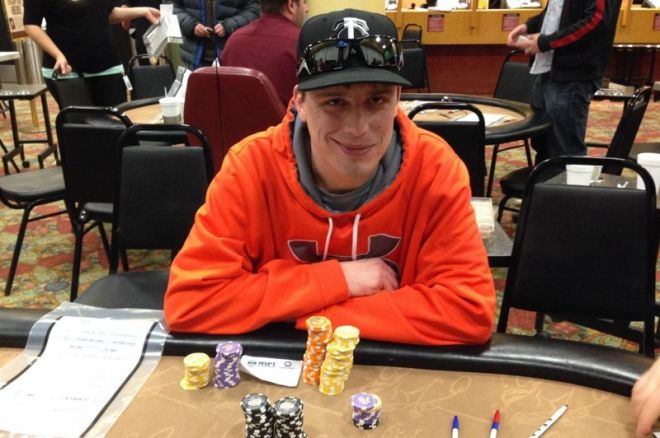 On Saturday, the Mid-States Poker Tour (MSPT) $1,100 Main Event at Running Aces Harness Park in Columbus, MN continued with Day 1b, which set an all-time MSPT flight record with 226 runners. Combined with the 128 entrants on Day 1a, the two-flight event attracted 354 runners creating a $355,200 prize pool.

Just 36 players survived Day 1a and another 76 advanced from 1b, meaning 110 players will return for Day 2 action on Sunday. Of those the top 36 finishers will get paid with the eventual winner taking home $91,000. Dustin Dirksen set the bar high on Day 1a when he bagged 254,800 chips – but Tyler Caspers accumulated 259,800 during Saturday’s 1b to take the overall chip lead heading into Day 2 action.

Day 1b got off to a mirthful start through the table banter and unorthodox play of Shane Nelson, but things got serious a little later as players began to hit the rail.

Holloway fell late in the evening when he three-bet all in for about 18,000 after a player had opened to 2,500. The small blind woke up with

couldn't catch up on the jack-high board.

Day 2 will kick off at 10 a.m. local time as the returning 110 players look to play down to a winner. Be sure to tune back to PokerNews then as we bring you all of the live updates from the first stop of the MSPT Season 5.