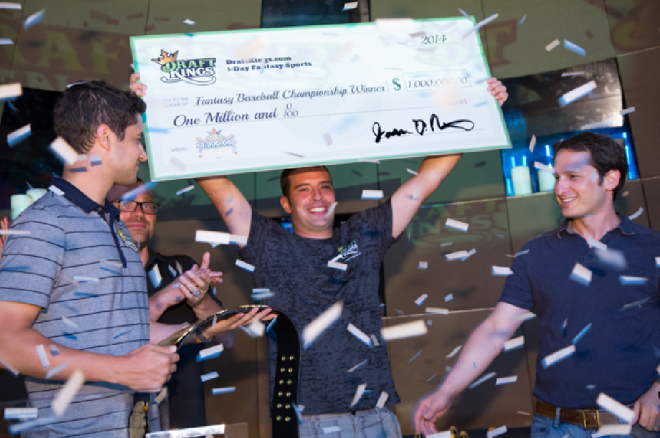 Jonathan Bales is the author of the Fantasy Football for Smart People book series and a DraftKings Pro.

This weekend, someone is going to win $1 million playing fantasy football on DraftKings, and even cooler, they're going to do it on a $27 entry. The fact that some Joe Schmo is going to spend $27 and walk away with a seven-figure payday is pretty insane.

But here's the thing: you could be that person, and chances are you're far more prepared to play daily fantasy sports than you think. There's a reason that so many poker pros have begun playing on DraftKings (with the majority finding a ton of success); poker and daily fantasy sports are extremely similar in a number of ways.

The reason that daily fantasy sports can be so profitable, despite the rake, is because, like poker, you get to compete against other people. You're not going up against DraftKings or a sportsbook with a bunch of sharps, but more like my grandpa who refuses to create a lineup without Devin Hester in it. Actually, maybe he's a next-level daily fantasy player ... have you seen Hester the past two weeks!?

Quick aside: my grandpa's name is Richard and his wife's name is Grace, so he naturally chose the username 'gra-dick.'

So anyway, yeah, the daily fantasy market is really, really inefficient. There are guys out there winning over two-thirds of their heads-up games, which would be just unimaginably impossible in the world of sportsbetting. Right now, daily fantasy sports is very much as beatable as poker in the good ol' days, and the scary part is that there's so much room for growth.

So how does the typical newbie mess up to create a wildly inefficient market? Well, it's a lot of ways, but roster construction is one of the biggest. The way you structure your lineup—how you pair teammates, which position you put into the flex, and so on—is just as important as your player projections/values.

Over the past two weeks, multiple users have won big tournaments despite not 'stacking'—pairing your quarterback with at least one of his receivers. Stacking is a fairly basic concept that dramatically improves upside.

Wide receiver fantasy production is obviously extremely connected to quarterback production, yet I'd estimate that maybe one-third of DraftKings users aren't stacking, which significantly lowers the upside of their lineups.

There are a number of such inefficiencies that allow for process-oriented players to become very profitable.

In big tournaments like this weekend's Millionaire Maker, you need as much upside as possible. In such a format, you should be willing to forgo safety, which will lower your team's floor, in order to secure as high of a ceiling as possible. Stacking is one way to do that. Pairing a return man with his defense is another; if you play someone like Cordarrelle Patterson with the Vikings D, you get double points if Patterson has a return touchdown. Using a running back and defense on the same team is yet another upside-inducing tactic; if the defense plays well and that team is winning, the running back will likely secure late-game carries.

Other times, you should be playing it safe. When you play someone head-to-head, you don't need to seek a high ceiling at all costs. I can't tell you how many times I've seen Vincent Jackson—a notoriously high-variance receiver—in head-to-head games even when he isn't a good value, or a low-ceiling player like Kendall Wright in GPP lineups.

When you play a hand of poker, you're always making sure that your goals and actions are aligned. Your approach as the chip leader is far different than when you're short-stacked. The same is true in daily fantasy sports, yet most users aren't playing the percentages; they're taking risks, but they're –EV.

Perhaps the biggest recent strides in advanced poker strategy have come in the area of game theory. There are all kinds of game theory elements involved in daily fantasy sports, too, particularly in the massive tournaments with a lot of users. In this weekend's Millionaire Maker on DraftKings, for example, there's a very good chance that the winner is going to hit on an obscure player that isn't in a lot of other lineups.

Those usage rates are extremely important in daily fantasy sports. Basically, there are two types of value. The first is strict dollar-per-point value: how many dollars you need to spend (you must work within the confines of a salary cap) for each point you can be projected to score. All else equal, you want to secure as much value as possible.

But "all else" isn't always equal. Imagine you enter a tournament and there's such an obvious value that every single user has him in their lineup. It wouldn't matter if that player scored zero points or 100 points because it would affect everyone in the same way. Thus, that player would have none of the second type of value: usable value.

To acquire the most usable value, you need to balance pure dollar-per-point value with expected usage. The latter task obviously invokes elements of game theory. In tournaments, you should be trying to balance value with ownership; you want the best players, but you also want to create a unique lineup.

Creating a unique lineup is very much akin to leaving yourself 'outs' in poker. You give yourself ways to bounce back if things don't go as expected. If you're in 50th place with one player left to play, who would you rather have: the top value who is in 25 lineups that are ahead of you, or a little bit worse value who isn't in any other lineups? The highest you can finish in the first scenario is 26th. In the latter, it's first.

I can't tell you how many times I've heard someone say something to the tune of "I'm not starting Player X this week. I started him last week and he was horrible!"

Poker players have a natural understanding of "good process." That's something that you quickly develop after a few bad beats. Poker players understand that the game is governed by probabilities, and you can make smart moves that don't work out in the same way that you can play really stupidly and have the chips fall your way.

In the end, those who play the percentages are rewarded. It's the same way in daily fantasy sports. Like a single hand of poker, there can be a lot of short-term variance, but after awhile, the variance dissipates and the true winners are left standing.

**To get you started on DraftKings, I created a 39-page PDF with content on how to win big tournaments (and some other bonus info) that you can download here for free.