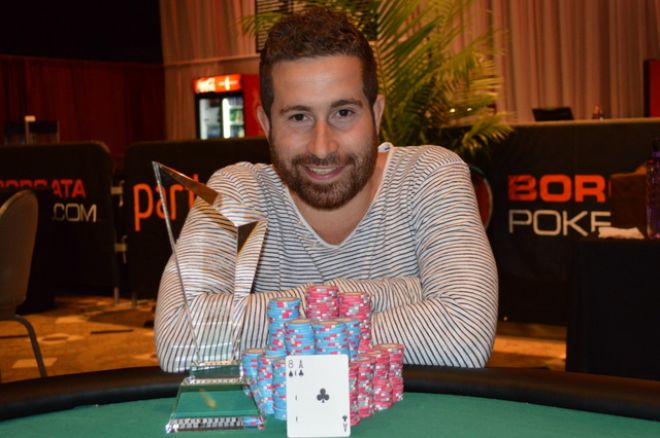 The pinnacle of the 2015 Borgata Poker Open – the World Poker Tour Main Event – is happening now, but prior to the cornerstone tournament numerous side events played out at Borgata in Atlantic City.

We've already told you about Federico Ottenio topping a massive field of 3,922 entrants to win the opening event for $325,127, as well as Chris Limo's victory in the "Almighty Million" for $168,873. Now, a high-profile player has joined their ranks.

Jonathan Duhamel, who of course won the 2010 World Series of Poker Main Event, topped a field of 287 entrants to win Event #14: $1,000 Six-Max No-Limit Hold'em for $70,990. The five-figure score is small by Duhamel's standards – it's his 17th-biggest cash – but it does mark his third win of the year. The first came back in January when he won the $5,000 Eight-Handed Event at the PokerStars Caribbean Adventure for $116,738, and the other was for nearly $4 million when he took down the WSOP $111,111 One Drop High Roller for his second gold bracelet.

According to updates from the event, Carl Leckner and George Medrano were the first to go in ninth and eighth place respectively, and then 2015 WSOP November Niner Patrick Chan followed them out the door in seventh. It happened in Level 22 (10,000/20,000/3,000) when Chan shoved his last 211,000 from the small blind with the

and was called by chip leader Tanner Millen, who held the

in the big. The

flop hit Millen, and Chan watched helplessly as the

peeled off on the turn followed by the

After William Kakon exited in sixth, Millen met his demise after a brutal run out after he got it in with the

flop looked as if the hand was destined to end in a chop, but the running

river ended up giving Gnidash a flush to send Millen out the door in fifth for $20,183.

Gnidash, who won the 2014 Borgata Summer Poker Open Championship for $153,726, then eliminated Evan Shaughnessy in fourth place followed by Allen Summerville in third. That set up a heads-up match with Gnidash holding a more than 3-1 chip lead over Duhamel, but the former World Champ held strong and wrested away the chip lead.

and Duhamel called with the

. It was a flip, but not after the flop came down

to give Duhamel two pair. Neither the

As previously mentioned, the World Poker Tour Borgata Poker Open Main Event is happening now. PokerNews will bring you a recap of the action upon the tournament's completion.

PLAY DAILY FANTASY SPORTS WITH NO SALARY CAP ON DRAFTPOT