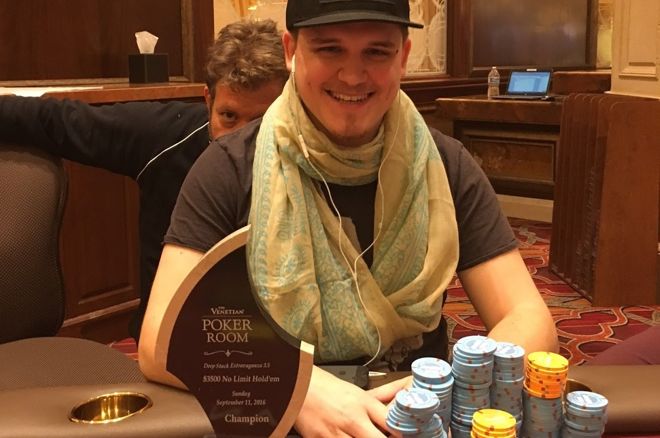 On Tuesday, Alex Rocha topped a four-way chop of Event #15: $3,500 $1 Million Guaranteed at the most recent Venetian DeepStack Extravaganza, taking home $173,861 for the biggest cash in a live career wherein he's compiled more than $1.2 million in earnings.

Rocha wasn't the only notable name grabbing a big chunk of the prize pool, which featured a $203,200 overlay (and 249 entrants in the three starting days). Matt Salsberg ($145,230) and Eric "basebaldy" Baldwin ($141,156) were among those who shook hands, along with an unknown player listed as only "Ryan T."

Rocha took a chip lead into the final table, where Jake Schindler was the first to fall, according to the live updates. Tony Gargano followed when he ran sevens into Ryan T.'s kings.

Ryan T. then found kings in an opportune spot again, calling the all in of Jason Bral, who had deuces. Bral found some outs on a board of

, but a king on the river was the last card he would see.

At the start of Day 2, the day's leader Ming Li was felled by Rocha in seventh when Li's queens failed to hold against the ace-king of Rocha. The latter found a king on the flop.

Eli Elezra was at his second big final table in the span of a week after coming second to Yu in the aforementioned WSOPC event. He wouldn't advance quite as far this time, getting his last eight big blinds in with aces only to have Ryan T. crack them with trip queens on the river holding queen-ten.

After doubling up twice as the short stack, Allyn Shulman lost a race to Salsberg, leaving her short once again. She did find one double, but when Baldwin put her all in from the small blind for about eight big blinds with ten-six, Shulman called with ace-five and watched as Baldwin ran a straight using only his six.

Shortly after that, the deal was made and Rocha posed with the trophy. Official runner-up Salsberg loomed behind him.

2015 WSOP Europe 888 Hand of the Day: Alex Rocha Skyrockets Up the Counts