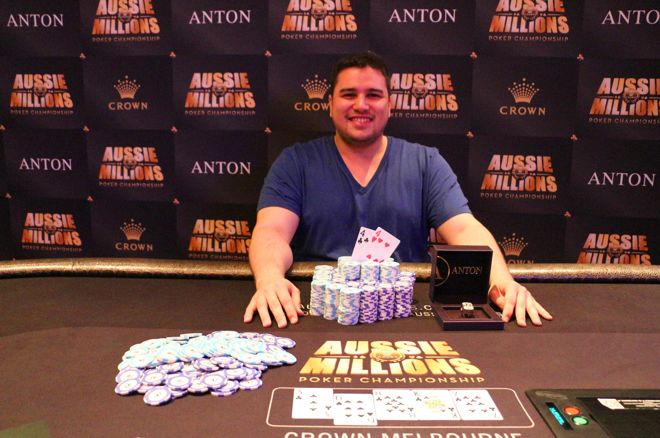 After two days of intense action, Event #5 has crowned its champion. Niall Murray triumphed in the no-limit hold’em Mix Max tournament securing an AUD$61,300 payday and his first championship ring.

Murray, who hails from London in the United Kingdom, now has more than USD$191,000 in live tournament winnings, with this result making up almost a third of that impressive total. Prize money and championship ring aside, this victory was made sweeter for Murray because it was also his first cash in an Aussie Millions event.

This exciting event began with 230 players exchanging AUD$1,150 for the chance to become an Aussie Millions champion. Play began on Jan. 16 at the Crown Entertainment Complex in Melbourne with everyone at full ring tables before the format switched to six-handed tables with only 36 players remaining. The final eight players would lock horns in a series of heads-up battles.

Among those who navigated into the top 23 finishing places and earned a slice of the AUD$235,750 prize pool were Canada’s Kristen Bicknell who fell in 23rd place for AUD$2,705 and Kenny Hallaert who bust in 20th place for AUD$2,705. Hallaert is enjoying a rich vein of form having finished in sixth place in the 2016 World Series of Poker Main Event.

The elimination of Michael Egan in ninth place sent Event #5 into the final of three stages of the Mix Max format heads up.

Each of the final four players were guaranteed at least AUD$21,405 for their efforts, which is the princely sum that Canadian star William Molson and Vietnam’s Linh Tran collected for their fourth and third place finishes.

The final was an all British affair with Murray facing Jack Salter for the title. Salter already has a championship ring on his finger, having won the AUD$5,000 no-limit hold’em Six-Max event in 2014. He narrowly missed out on winning a second ring when he finished as runner-up to Scott Davies in the 2014 Aussie Millions Main Event.

Unfortunately for Salter, the wait for a second ring continues because he finished in second place once again, leaving Murray to walk away with the largest live tournament score of his career and a place in the Aussie Millions history books.