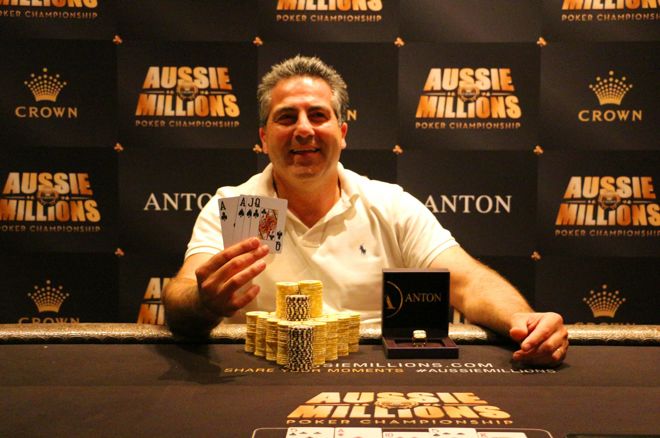 Australia’s Serge Osalan became the second local player to be crowned a champion at the 2017 Aussie Millions at Crown Melbourne after taking down the fourth event of the series for AUD$58,315. Event #4 featured an AUD$1,150 buy-in and was the first of four pot-limit Omaha events on the schedule.

The event began on Jan. 16 with 237 runners, up from the 217 players who played the same event in 2016 when Japan’s Yuki Ko won the top prize of AUD$54,500. Not only did the 16 players who advanced to Day 2 make the money, with the tournament cashing 27 players, but also a handful who were eliminated on Day 1 made at least the minimum cash including American Matt Affleck (18th – AUD$2,915).

All but one of the players on the final table hailed from Australia. Bulgaria’s Nilolay Markov recorded his first live poker cash of the tournament after bowing out in sixth place for AUD$12,145.

Nikolaos Solomos and Osalan were the last two standing in the tournament. Solomos already improved on his previous best finish in an Aussie Millions event, which came last year when he took fourth place in Event #18: AUD$2,500 Pot Limit Omaha for AUD$26,715.

However, after the final cards were dealt, it was Osalan who earned the victory, leaving Solomos with the runner-up prize of AUD$37,655.