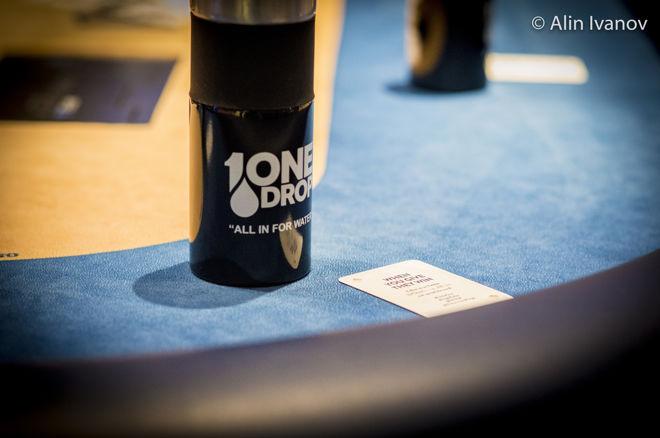 Minutes before the €111,111 High Roller for One Drop No-Limit Hold'em event resumed at the World Series of Poker Europe on Saturday, WSOP Executive Director Ty Stewart made a big announcement regarding the 2018 series in Las Vegas next summer.

The seven-figure buy-in event will return to Las Vegas after a four-year hiatus for its fourth-ever edition. The event will be capped at 48 players and once again, the WSOP will waive their fee so the entire $111,111 entry fee for each participant goes directly to the One Drop Foundation.

The One Drop foundation is committed to providing sustainable safe water access to communities in need worldwide. The WSOP and One Drop began a partnership in 2012 which has raised over $20 million for the charity, started by Cirque du Soleil's founder Guy Laliberté. The Big One for One Drop has accounted for nearly $14 million of that contribution, and the event in Las Vegas in 2018 will further add to that figure.

“The Big One is an important landmark in the history of poker. Players that I meet here and there remind me on a constant basis that this history lives on and that they want to be a part of it. The thrill to compete for the chance of walking away with millions all the while contributing to an important cause - providing safe water access globally – has given strong roots to the event.

"I am currently working on a new major fundraising initiative that is tapping into another very important passion of mine and that will be announced soon. This leaves me with less time for poker, but I’m confident that after three editions, the Big One is mature enough to live without a big involvement on my part."

During the announcement at the WSOPE, Stewart commented, "I remember in 2012 people said that a $1 million buy-in tournament was crazy. They also then said that you couldn't have 11% juice on a mid-stakes tournament; that's crazy! Or have a $10 million guaranteed One Drop in Rozvadov!

"However, what is truly crazy is that to date we have raised more than $20 million because of the generosity of you all, which makes us one of the biggest charitable partnerships in the world.

"For anyone who says that poker players aren't charitable it's just truly amazing. That motivates us that there should be no end in sight."

The first three versions of the Big One for One Drop took place in 2012, 2014 and 2016, with the first two at the Rio in Las Vegas and the most recent one in Monaco. It has attracted 86 unique players, with 22 players who have played in two or more. Here is a look at the three winners to date.

Stewart introduced at the WSOPE High Roller for One Drop the first entry into the 2018 Big One for One Drop: King's Casino owner Leon Tsoukernik.

Tsoukernik responded, "I know you all want to participate in this beautiful event, and I'm waiting for you all in Vegas. Thank you!"

In the WSOP press release, Tsoukernik elaborated on his support for One Drop.

“I had the opportunity to work closely with One Drop around the World Series of Poker Europe this year and to get acquainted with Guy, and this made me understand the unparalleled importance of the cause of water.

"I am a father of two and it really struck me when I heard that every 90 seconds a child dies from a water-borne disease. We all need to do something about it. Me, I have decided to do what I am best at: bringing people together to play poker. I am not only the first player to put his name on the list. I have also promised Guy that I will pick-up the phone to make sure the enthusiasm for the Big One translates once again into a great success for the charity.”

The remaining 47 competitors remain to be determined and players can reserve their seat for the Big One for One Drop event at the 2018 World Series of Poker July 15-17 on a first-come first-serve basis with a non-refundable $50,000 deposit by July 1. Interested players should contact Alexandre Meunier at One Drop ([email protected]) or Gregory Chochon at WSOP ([email protected]).