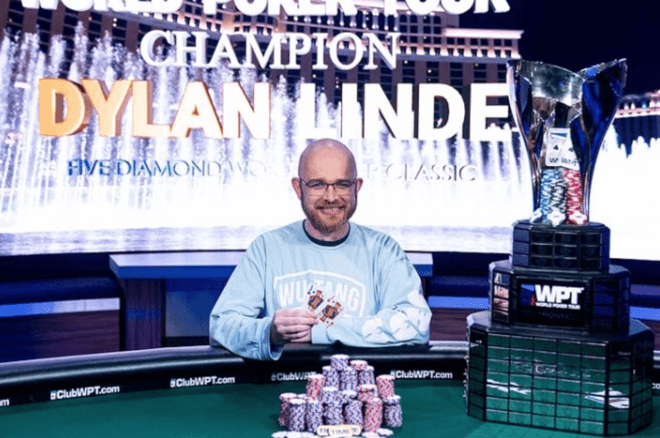 The World Poker Tour (WPT) wrapped up its 2018 schedule with the $10,000 buy-in Season XVII WPT Five Diamond World Poker Classic at the Bellagio in Las Vegas. The tournament attracted 1,001 entries, which made it the largest $10K tournament in WPT history.

After five days of play, poker pro Dylan Linde emerged victorious to capture a career-high $1,631,468 and a $15,000 seat into the season-ending Baccarat Crystal Tournament of Champions.

According to updates from the event, Milos Skrbic began the final table as the chip leader and he scored the first elimination 37 hands in. It happened when Barry Hutter got it all in on a

and was up against Skrbic’s

On Hand #69, Lisa Hamilton got her stack all in preflop and was racing with pocket fives against Linde’s ace-ten suited. The board ran out with two tens on in and that was all she wrote for Hamilton, who took home $451,880 for her fifth-place finish.

Fourteen hands later, Linde jammed the small blind to put the pressure on Ping Liu, who was in the big. Liu called off with ace-four and was ahead of Linde’s jack-deuce suited. Unfortunately for him, the flop brought a deuce and Liu failed to retake the lead. Not only did Liu earn $599,147 for his fourth-place finish, he earned precious Player of Year points to move into second place behind Tony Ruberto on the Hublot WPT POY leaderboard.

On Hand #100, Andrew “Lucky Chewy” Lichtenberger got his chips all in on the flop holding top pair against Skrbic’s club flush draw. A club on the turn left Lichtenberger drawing dead and he had to settle for third place and $802,973 in prize money.

Linde took a slight chip lead into heads-up play against Skrbic, but the duo would battle for 35 hands before things came to a head. In the final hand of the tournament, Skrbic shoved his last 17 bigs from the button with pocket fives and Linde woke up with jacks. A five failed to materialize and Skrbic fell in second place for $1,087,603.

The WPT will hold its next event beginning January 12 with the $10,000 buy-in WPT Gardens Poker Championship at The Gardens Casino.

Images courtesy of the WPT.

WPT Announces Additional Stops for Second Half of Season XVII