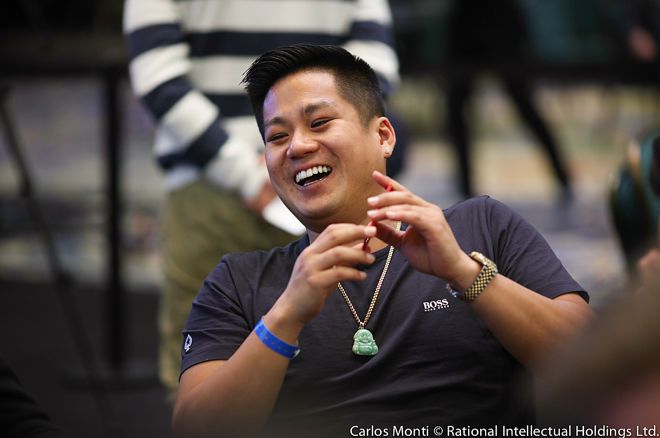 The 2019 PokerStars Caribbean Adventure (PCA) Main Event has passed the halfway point with three out of five days in the books. A field that started out with 865 hopefuls has been whittled down to the final 20, and each of them is looking to take home the first place prize of $1,567,100 that will be awarded on Wednesday, January 16.

Usually, there's a clear chip leader or a select few that stand out from the pack, but not this time. Although WSOP Monster Stack winner Tommy Nguyen claimed the coveted top spot with 2,705,000, there's plenty of others hot on his heels. Jeff Hakim (2,640,000) is only two big blinds away from being top dog, Daniel Strelitz (2,615,000) trails just by another big blind and EPT Prague $50k High Roller champ Matthias Eibinger (2,485,000) is in striking distance as well.

The biggest name left in the field is that of David "Chino" Rheem (1,425,000). Although Rheem's checkered past may has divided the poker world's opinion of him over the years, he's still a force to be reckoned with at the tables. A win in the Main Event would be a career highlight and lift him over the $10 million in lifetime winnings. The American ended the day in the middle of the pack after flirting with elimination earlier in a hand against Eibinger, where Rheem rivered a crucial straight to stay in contention.

Between all the heavy hitters, the odd man out is Scott Wellenbach who's likely to have the railbirds rooting for him on the penultimate day. Wellenbach, a 66-year old Buddhist text translator from Halifax, Canada, has vouched to donate all his winnings in this event to charity. In an interview with PokerNews, Wellenbach described his day as a huge rollercoaster, talked about his respect for the competition and about charity. Wellenbach ended the day with 1,135,000 in chips.

While all aforementioned players will be back, among those that fell by the wayside on Day 3 is Filipe Oliveira, who was the last player to miss out of Day 4. Just two months ago, the Portuguese won the MILLIONS event in the Bahama's for $1.5M. His second deep run on the Caribbean island ended against Vogelsang with king-jack versus ace-jack and he took home $52,440 this time.

The final two Team PokerStars Ambassadors Andre Akkari (24th - $44,060) and Randy Lew (43rd - $28,520) were also eliminated on Day 3. They were joined on the rail by the likes of start-of-the-day Pierre Calamusa, Maria Ho, Scott Clements, Dzmitry Urbanovich, Anthony Zinno, and Claas Segebrecht. Segebrecht was clashing with Deadman at the feature table all day, and lost an unlucky pocket aces versus ace-king hand before getting bluffed off a big hand. Deadman then finished what he started and eliminated Segebrecht just after the dinner break.

On Tuesday at noon local time, the 20 remaining players will return for the penultimate day of the Main Event. Each of them has already locked up $60,840 for their efforts but all eyes are on the first place prize of $1,567,100. Blinds will resume in the level 10,000/25,000 with a big blind ante of 25,000. Levels will be 90 minutes throughout the day and play will continue until the final 6 players have been reached. PokerNews is on the floor to cover the PokerStars Caribbean Adventure start to finish so make sure to check back regularly for all the updates from the Atlantis Resort in the Bahama's!