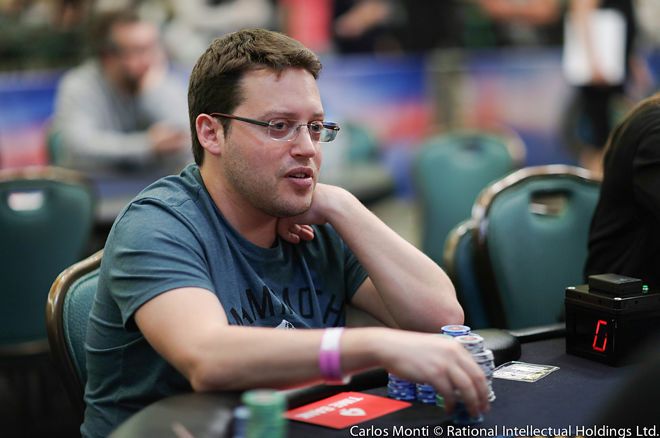 The biggest $25K tournament in poker history is down to just five tables, as 38 players remain in contention for the $5.1 million first-place prize at the PokerStars Players No-Limit Hold'em Championship.

Leading the way into Day 4 will be a pair of direct buy-ins from opposite sides of the Atlantic, all but deadlocked at the top of the counts. American Scott Baumstein and the U.K.'s Yiannis Liperis bagged 4,240,000 and 4,210,000, respectively, making them the only players north of 4 million heading into the penultimate day of the event.

"It feels good," Baumstein said of the position he's in. "This is definitely a good tournament to run well in.

"This is definitely a good tournament to run well in."

"I was chipping up pretty much all day. I lost an all-in near the end then made a run at it and won a big flip versus Farid [Jattin]. I was actually surprised he was as strong as he was, but it worked out for me."

Baumstein called with queens and got a fairly easy hold against ace-king as nothing on the board materialized to threaten him.

"I was sweating that flip pretty hard," he admitted with a smile. "That was a big one. From what I understood, it was the biggest pot of the tournament."

"That was a big one. From what I understood, it was the biggest pot of the tournament."

As for Liperis, he got there on a big combo draw against the top two pair of Yan Li to move over 1.8 million. Then, he hit another nut flush after calling a sizable turn bet against Jonathan West, who couldn't find a fold on the river with a hand that never got shown down despite a river shove and a call.

Meanwhile, eight Platinum Pass winners still remain in the field heading into Day 4. While Mikita Badziakouski — he of over $20 million in live cashes — advancing is hardly a Cinderella story, there are still several players for whom a $5.1 million payday would hardly seem imaginable.

Ramon Colillas, Adrian Samu, Atanas Pavlov, Marc Rivera, Michael Roboniek and Jacqueline Burkhart all have $100,000 or less in live cashes and would make positively Moneymaker-esque stories were they to ship the PSPC.

Day 3 also saw the money bubble burst early on, and nearly 150 have already cashed payout tickets. Bill Perkins, Dylan Linde, Christoph Vogelsang, Ryan Riess and all three of Sam, Luc and Max Greenwood were among those getting paid.

The remaining 38 players gather for Day 4 at noon local time on Wednesday. Play continues at 25,000/50,000/50,000 with the plan to play to at least eight players, possibly longer if time allows. Come back to PokerNews to find who those few will be.

For the Day 4 seat draw and to read all the updates, follow along in the PokerStars Players Championship Live Reporting section.