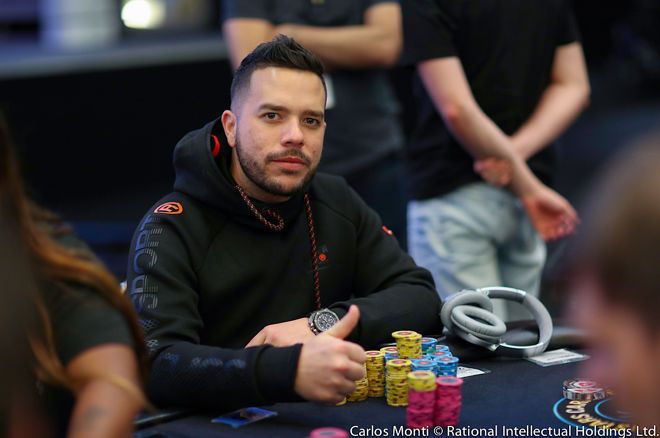 Day 2 of the record-breaking $25,000 PokerStars No-Limit Hold'em Players Championship as part of the 2019 PokerStars Caribbean Adventure has come to an end with just 207 players still in contention. Even before the cards got into the air at noon, the field had reached four-figures and another 26 hopefuls jumped in.

That created a field of 1,039 entries and monster prize pool of $26,455,500, making it one of the biggest events ever. The top 181 spots will take home a portion of that and a Bahamian flag for their Hendon Mob profiles. The winner can look forward to a life-changing payday of $5.1 million, which includes $1 million added by PokerStars. While the money spots were not reached throughout the eight 60-minute levels on Day 2, the bubble won't be far off when the action resumes for Day 3.

Leading the survivors into Day 3 will be Farid Jattin with 921,000. The high roller regular from Colombia edged past a trio of familiar faces in the final level of the night with Mustapha Kanit (888,000), Griffin Benger (885,000) and Julien Martini (832,000) hot on his heels. Jattin is certainly no unknown at the international poker tables — the regular on the European Poker Tour and Latin American Poker Tour has already racked up nearly $3 million in live cashes.

Martini continually increased his stack throughout the day and sent 2005 EPT Copenhagen champion Noah Boeken to the rail when flopping top two pair with eight-nine suited against the bottom pair and nut flush draw of the Dutchman. Kanit spent most of his day on the secondary feature table and Benger built up his stack without showdown in the final level of the night when taking on Sven McDermott twice.

Among the players that made the most of their late entry before the start of Day 2 were Brandon Adams and Ramin Hajiyev. Especially Hajiyev got involved in many big pots, making waves early on and ascending to the top mid-way through the day when he called the shove of Fox with ace-jack for flopped top pair and held against a king-high flush draw. Adams advanced to Day 3 with very respectable 731,000 and Hajiyev follows not far behind with 720,000.

Several Platinum Pass winners also bagged and tagged for the night, and Frenchman Alexandre De Zutter tops them all with 700,000. In the last break of the night, De Zutter had far less than that with just 250,000 and ran hot in the final two hours of the night. He admitted that he got lucky in one particular hand where he went runner-runner to beat a flopped nut flush with a full house before dropping a few chips at the very end of the day.

With more than 700 players returning to their seats in the ballroom of the Atlantis Resort, many hopes were crushed and big names fell along the way. Phil Hellmuth lost a race with pocket tens against the ace-queen of John Andress on the feature table and defending PCA Main Event champion Maria Lampropulos was coolered with the flopped second nuts against the nut straight of Theo Da Cruz Lima.

Team PokerStars suffered heavy losses on Day 2, as Lex Veldhuis and Kevin Martin were ousted in the first level of the day, Team Pro Jen Shahade and Team Online's Randy Lew followed soon after. Aditya Agarwal, Fatima Moreira de Melo, Chris Moneymaker, Jake Cody and Jason Somerville all bowed out before bagging and tagging. The dream of Jaime Staples to make a deep run ended in the final level of the night when his pocket jacks were outflopped by Marvin Rettenmaier's ace-jack.

The $25,000 PokerStars NL Hold'em Players Championship will continue with Day 3 on Tuesday at noon local time with blinds of 4,000/8,000 and a big blind ante of 8,000. The money bubble is expected to burst in the first few levels of the day and once the money has been reached, the 30-second clock comes into play.

As usual, the PokerNews live reporting team will be on the floor to provide all you need to know about one of the biggest poker events to date.