The World Cup of Cards Returns to Playground 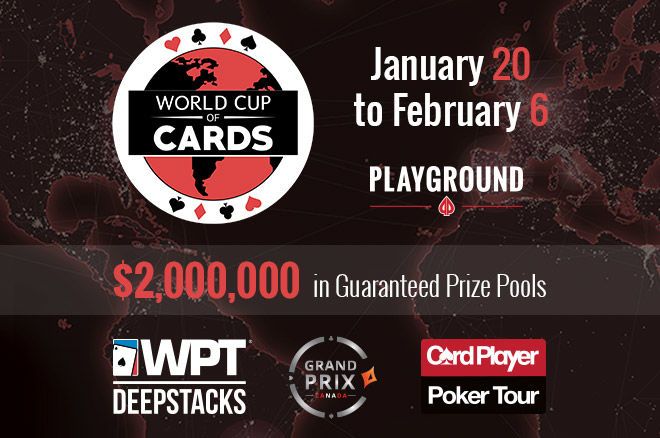 The World Cup of Cards is Playground’s multi-tour, multi-format festival, and the third WCC will be dominating the felts at the iconic poker room in Kahnawake, Canada, from January 20 to February 6, 2019. With three huge-guarantee marquee events and 23 other tournaments in a variety of rarely seen poker formats, the WCC is a can’t-miss poker series.

Winter is typically cold in the Montreal area, but the $200 + $20 Grand Prix Canada event with a $500,000 guarantee should help to thaw things out. With a total of seventeen Day 1s (live and online), players will have plenty of opportunities to play their way into Day 2. The buy-in to guarantee ratio makes the effort worthwhile; it’s a rare thing in poker to play for such a huge guaranteed prize pool for just a $220 buy-in.

The WCC Main Event is the return of WPTDeepStacks, a $1,500 + $150 event with a $750,000 guaranteed prize pool. The WPTDeepStacks Tour’s first stop at Playground played out just 2 months ago and saw David Quang edge out Daniel Dubeau for the win. The event features 3 Day 1s and will crown its champion on Day 3, when someone walks away with a huge first-place prize.

The final marquee event is the return of the $1,000 + $100 Card Player Poker Tour, carrying a $250,000 guarantee. This Season IV event will see players try and match the achievements of Brady Hinnegan and Luc Bellerive, the champions of the first two CPPT events held at Playground in 2016 and 2017. One thing that will appeal to recreational players and pros alike is that the tournament has a very compact format – it’s due to play out to a winner on Day 2!

Beyond these headliners is a grab bag of tournaments in formats that are rarely – if ever – seen in festivals other than the WCC. The whole series kicks off with Playground’s popular Tag Team format, and peppered throughout the festival players will find Shootouts, Short Decks, Megastacks, Crazy Pineapple – not to mention the hugely popular Roll the Dice mixed game format! To top it off, the Strangers in the Night event is back, sending the entirety of the tournament fee to the charity initiative of the same name.

The WCC is also an amazing platform towards seats in the MILLIONS North America, which returns to Playground in May 2019. The $5,000,000 guaranteed MILLIONS Main Event, scheduled from May 22 to May 27, is a $10,300 tournament. A 3-Step satellite tree has been running for some time and the World Cup of Cards will offer great opportunities to earn a seat early to Playground’s biggest tournament on the calendar.