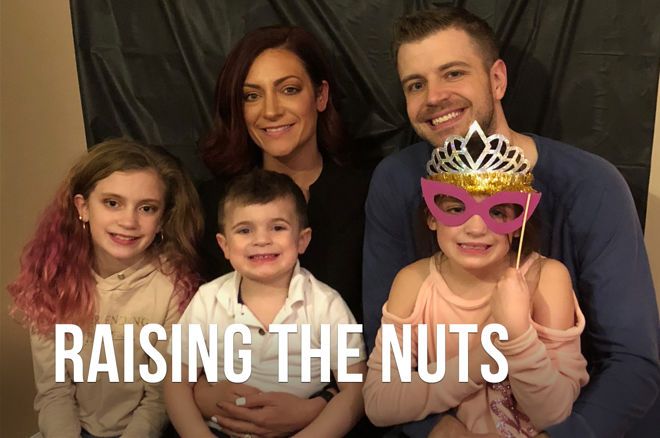 With the comedy, originality and reach of the videos — several well-known poker players are depicted in them — it’s no surprise the channel has sprinted to over 1,000 subs.

Just over two months ago, Savage posted the first Raising the Nuts video that solely featured the kids. In “Andrew is looking for a Poker Girlfriend,” his four-year-old son Andrew puts his hat in the ring as a suitor for another new vlogger in town, Marle Cordeiro. Trevor’s two daughters Ava and Cameron also appear in the video playing Andrew’s “ex-girlfriends” Jamie Kerstetter and Kelly Minkin, the latter being “too spewy” for him.

On that note, the video also portrays a rather epic hand reenactment from Friday Night Poker involving Minkin’s Halloween-edition seven-deuce bluff/float/runner-runner bink against Justin Young. The comedy and cuteness of the video captured the community and encouraged more videos of the like.

Marle herself was the first to comment below the video, saying: “Hi, hello! This is amazing!!”

And fellow vlogger Andrew Neeme offered his support: “Marle for the love of everything #givedrewachance!”

And Jeff Gross approved: “This is epic! Haha absolute gold.”

The Savages have followed up with three more equally amazing videos including Andrew doing polker hand analysis like Doug Polk, reenactment of another hilarious Friday Night Poker hand and highlights from the Super High Roller Bowl including a spot-on Daniel Negreanu impression. The latest video takes place in the Bahamas – more about that later.

Inspiration for Raising the Nuts Videos

We caught up with the Savage family in the Bahamas during the PCA and asked Trevor what inspired the videos.

In his 15th year of playing poker professionally, Savage primarily plays online cash games from his home in New Jersey at stakes of $1/$2 on up to $25/$50 when he finds them, and up to 15 tables at a time. He got started with vlogging as a contestant in the Vlogger in Paradise competition run by Gross and Neeme, which had a Platinum Pass reserved for the winner.

In the fourth required vlog, participants were asked to do a video on their favorite poker moment and Savage chose to reenact his first poker heater. The kids acted it out as Trevor narrated, and the product was priceless.

Later, after seeing Marle’s vlog of her satirical search for a poker-playing boyfriend, Trevor thought it would be funny to have Andrew do a similar video where he’s looking for a poker girlfriend. Coupled with the fact that the kids had done several YouTube videos on cooking, plus they love acting and are “naturally kind of ridiculous,” Savage decided to get planning and writing.

“I was never someone who was really a creative person," he said. "I just played poker. When I started writing out the ideas and the script for the Andrew is looking for a poker girlfriend video, I was like, ‘This is the most fun thing I’ve ever done.' It was so enjoyable.”

“I was never someone who was really a creative person. I just played poker."

Savage comes up with ideas and runs them by a friend before writing up scripts, but he credits the kids for being into the acting and delivering their own styles.

“Cam and Andrew love doing it,” Savage said. “Ava’s a little more… She wants to be behind the scenes, do some editing – and that’s cool too. But they love doing it and it’s fun to do.

“The most amazing thing about them is when we go to shoot a video, a lot of the reactions that you see in the videos, I’m not telling them to do it. I just say this is the line and they just do their thing. And Andrew’s natural face reactions like to Jamie Kerstetter saying ‘Crouton’ and things like that – they’re just so good!”

Savage, who mostly just played poker online day in and day out before getting into content creation, finds a different sense of satisfaction from his newfound hobby.

"A lot of the reactions that you see in the videos, I’m not telling them to do it."

“Writing the script and seeing it all come together, and then when you put up a final product and people give positive feedback… It’s such a cool process where people say things like, ‘Your kids are hilarious’ or ‘This is awesome.’ It’s been fun.”

That sense of community he’s found through the channel carried into his recent Bahamas trip, where the latest video takes place.

The Savage Crew Goes to the Bahamas

Though he didn’t snag one of the two passes given out through Vlogger in Paradise, Savage did make the final five and became friends with others in the competition like Oliver Biles, a trained actor who did win a pass. Along with his wife Jody, Trevor decided last-minute to head down to the Bahamas to play in the $25K PokerStars Players Championship and meet some of his fellow vloggers.

In the Bahamas, the kids got the opportunity to meet many of the poker pros they had portrayed in videos - a fun treat for both the kids and the players.

Today @RealKidPoker was so excited to meet Andrew after finding out he was the kid who impersonated him in my lates… https://t.co/QmMGG6biTh

During the PSPC, Savage was seated next to Stephen Chidwick on Day 1 and next to Alex Foxen on Day 2. Andrew having recently depicted both players’ intense stare-downs in the Super High Roller Bowl highlights video, Savage couldn’t help but laugh when Foxen stared him down during a hand. Savage told the table why and they all got a laugh out of it, and Foxen confirmed he had seen and enjoyed the video.

In the latest work, Marle (played by Cameron) decided to Give Drew a Chance, but she’s growing displeased with the level of attention he’s giving her now that he’s gone big-time. Watch out Phil, there’s a new Poker Brat in town: everyone wants a piece of Andrew Hellmuth in The Bahamas. Check out the must-see video below.

Future of the Channel

As far as the future of the channel, Savage plans to continue to bring fun to poker through the kids. He also plans to do more in terms of mental game and mental health, which has become a major focus for him in the last few years.

If you watch the videos, it’s clear why the channel has gotten so much love. It's only a matter of time before the Savages surpass 10K followers and beyond, and the only real question is: What will they do next?

I can't take it. How does this VLOG not have endless shares/views? So creative!! https://t.co/bVdoL81sFu

You can watch Trevor and kids talk about the channel in the following PokerNews interview.