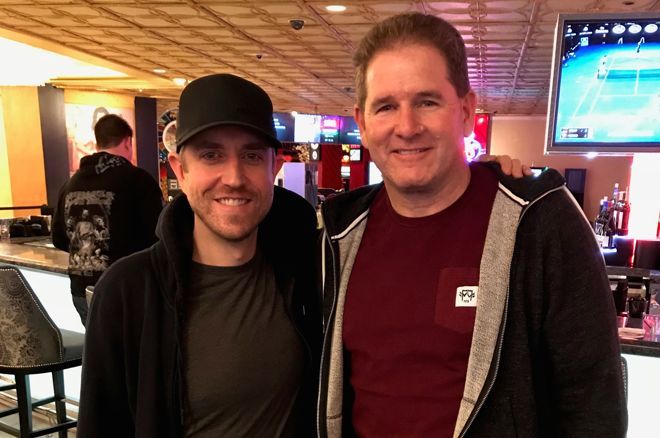 Andrew Neeme and Brad Owen have carved out a pretty unique niche as popular YouTube vloggers who document their lives grinding out a living mostly in mid-stakes cash games around Vegas. A couple of years back, they decided to provide a live space for their growing internet communities to gather and the Meet Up Games (MUGs) were born.

Hundreds of individuals have attended at least one of the more than 30 games Neeme and Owen have already hosted, but they’ve also hooked some who have become regulars in the games. One of them is Brian Stafford (pictured above, right), an equities and futures trader living in San Diego who takes some time from work and heads to MUGs every chance he gets.

Stafford started out just watching and enjoying the YouTube vlogs of both Neeme and Owen and figured he’d go check out a MUG out of curiosity.

“Both Andrew and Brad came across in their vlogs as knowledgeable poker pros with a desire to share their experiences with an audience of like-minded poker players,” he told PokerNews. “The creativity they displayed in their vlogs was impressive and they seemed like good people, too.”

He went to his first MUG on Dec. 6, 2017 at Westgate in Las Vegas and has been to a total of ten now: seven at Westgate, one in Seattle at Redbird’s Hideaway, one in Santa Rosa at Graton Casino, and one in Austin at the Texas Card House. Prior to participating in the meet-ups that usually spread cash games of $2/$5 no-limit or similar stakes, Stafford had only really played $1/$2 and $2/$3 locally in San Diego casinos with a limited player pool. His newly gained experience has helped him become comfortable playing in higher limit games.

“My game has definitely improved as a result of playing in the MUGs," he said. "Being exposed to different players each session/location forced me to adapt to table dynamics that I hadn’t been previously exposed to.”

“My game has definitely improved as a result of playing in the MUGs."

For Stafford, traveling and playing in MUGs are a well-deserved break from his daily work grind.

“My job allows me to virtually work from any location and I have a wonderful wife who encourages me to play poker whenever I have the chance, so I’m very fortunate and thankful for the opportunities to travel and play poker.”

Stafford hopes to see more MUGs with the format that they recently ran in Austin with a cash game one night and tournament the next. He’ll continue to attend the games, hoping for maybe some new cities added to the list to expand his travel destinations.

For others who may be considering attending, Stafford thinks it’s worth the effort.

“They are both as genuine as they seem in their YT vlogs," he said. "Both are eager to meet each and every person that shows up to the MUGs and both go out of their way to play at each table.”

Since their humble beginnings at the Mirage, the Meet Up Games have come a long way as they constantly expand to new cities and try new things.

“Every MUG seems to be unique in some fashion,” Neeme said. “Our very first game at the Mirage, before they had the MUGs brand name, was a blast. We got four tables going by simply putting out a tweet during the WSOP and sprung it on the poker room.

"They handled it really well. I handled all the drinks less well.”

Since that time in the summer of 2017, the MUG has become a staple complement to Neeme and Owen’s YouTube channels, and has found a semi-permanent home at the Westgate in Las Vegas.

“The approval from the Westgate to set up shop and film everything was a big step," Neeme said, referring to the notoriously red-tape heavy environment of a casino. "Seeing them put the ‘Filming in Progress’ sign out front and fully embrace the social media aspect of the games was really promising.

“The staff at Graton Casino did the same thing recently for a MUG, and it was extra special because that’s right by Brad’s hometown. So his whole family came to the game and he got to share that experience with them.”

With the live cash game meetup experience solidified, they’ve recently started dabbling with multi-day events that include one night of tournament poker.

“We just ran our first Tournament MUG at the Texas Card House in Austin, which was $130+$20 and had a $100 bounty on both Brad and myself,” said Neeme. “We found that it’s great to have different price points that can be approachable to different vlog fans and their respective bankrolls.”

You can check out some highlights from the recent Texas Card House MUG on Neeme’s vlog below:

MUG Future, Far and Near

To Neeme, the possibilities for this fun complement to two vloggers’ channels are wide open.

“I think we’ve only scratched the surface so far with MUGs," he said. "We’re coordinating our first games on the East Coast at the moment (get ready, Maryland Live!) and it’ll be great to reach a new region with the events.

"We’ve only had the one tournament so far, but it was a great turnout as we put together a $22K prize pool for the host property’s weekly $5K guarantee. Think about all the directions we can go with both cash game and tournament offerings, and a passionate poker playing/vlog watching/social game-attending community.”

Recently, Neeme appeared on the Top Pair Podcast to discuss the MUG project and more. You can listen to that interview here.

For up to date information on MUGs, you can head to their facebook page.

Reporting by Pam Maldonado contributed to this article.
Photo courtesy of Brian Stafford.