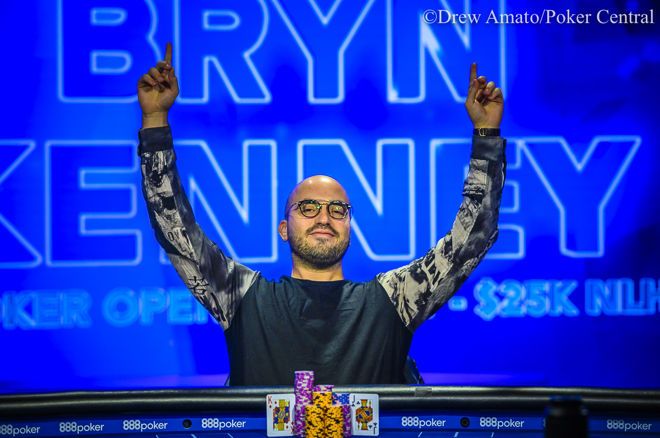 It took Bryn Kenney an hour to roll over the 2019 USPO Event #7: $25K NLH final table eliminating four out of his five competitors on his way to winning $450,000 and his first USPO title.

It marked Kenney’s second cash of the 2019 USPO after finishing 10th in Event #1: $10K NLH for $27,000, and while he still trails Stephen Chidwick, Sean Winter, and Cary Katz in the 2019 USPO overall points race, he’s now in a position to give them a run for their money headed into the final three events.

“This feels good. Last year was the only losing year I’ve ever had in my poker career and I felt as though I needed to follow it up with a home run year like I did in 2017,” Kenney said, who last month won the Aussie Millions Main Event. “It’s fun, the best thing is to win nice trophies in poker and this one looks great. It would make for a nice mantelpiece."

Kenney’s dominating performance was sparked by a hand early on when action folded to Nick Petrangelo in the small blind and he shoved with jack-six suited. Kenney had king-eight in the big and call off for more than half his stack. He was rewarded for it as he won the hand to send Petrangelo out the door on just the third hand of the final table.

Not long after, Keith Tilston eliminated the short-stacked Nick Schulman – the result of queen-ten failing to get there against ace-eight – and then Kenney turned around and busted Tilston after shoving the button with pocket threes and holding against the ace-jack call off from the big blind.

Kenney proceeded to flop two pair with the old eight-three to take most of Ben Yu’s chips. Yu, who began the final table as a big chip leader, had flopped top pair and paid off big bets on both the turn and river. Yu would fall minutes later when his ten-six suited was flushed by Kenney’s queen-jack.

Kenney began heads-up play as a more than 10:1 chip leader against Jake Schindler and it took six more hands for him to finish things off. Schindler won the first five hands of heads-up play, all small pots, and in the final hand he got it in with ace-seven against Kenney’s king-jack. A king on the flop put an end to Schindler’s run and he fell in second place for $300,000.

PokerNews coverage of the 2019 USPO continues now with live updates from Event #8: $25,000 Mixed Game Championship, which you can follow here.