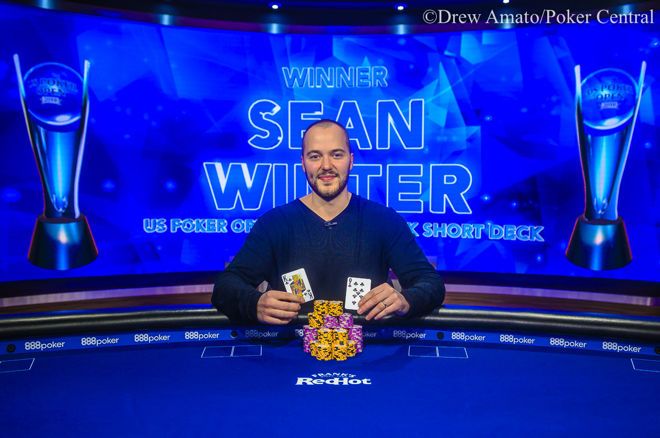 The fourth final table was the charm for Sean Winter!

It’s a game stripped of twos, threes, fours, and fives. A game where aces double as fives and flushes beat full houses. Winter didn’t have much experience with the game and had to contend with an all-star lineup, including Chidwick, but it didn’t matter as he ultimately emerged victorious in the 42-entry field.

"Three of the tournaments I knew how to play the games, this one I was just trying to figure it out on the fly,” Winter told Maria Ho in his winner interview.

Winter was also awarded 200 points in the 2019 US Poker Open Championship race to vault ahead of Chidwick.

“Everything is just flowing well. I’m focused, feeling mentally strong and I’m getting lucky in the right spots and getting away with things in others," Winter told USPO officials. “I probably need another first or second place because I think Stevie is going to do well the rest of the series. I haven’t really put much thought into it until this point and I might need 600 points to win this thing.”

He added: “Right now, I don’t really want to do anything else but play these events. When you’ve got a nice hot streak going you just want to keep it going. This is the most fun poker gets.”

Chidwick, who was making his third final table appearance of the series, was actually the first to fall after he shoved his short stack over four limps holding ace-queen. Unfortunately for him, Winter had limped with kings and held after making the call.

Ben Yu then shoved with king-queen suited and failed to get there against Seth Davies’ ace-eight, and a short time later the start-of-the-day short stack, Ben Lamb, bowed out after shoving queen-jack and getting called by Winter, who had once again limped with kings.

Three-handed play lasted for a while before Davies got it all in with ace-jack suited and was up against Winter’s jack-nine suited. Winter flopped two pair and that was all she wrote for Davies, who earned $67,200 for finishing in third place.

David Peters, who began the final table as chip leader, got an early double in the heads-up match to even the stacks, but despite his best efforts, Winter pulled out to another lead. That is when Winter jammed with king-nine suited and Peters opted to call off with jack-nine. Winter flopped two pair and Peters had to settle for second place as $100,800 in prize money.

PokerNews coverage of the 2019 USPO continues now with live updates from Event #5: $25,000 NLH, which you can follow here.

Remember, you can watch all USPO final tables exclusively on PokerGO. Subscribe to PokerGO for just $10 a month or $99 a year to watch all the U.S. Poker Open final table action plus PokerGO’s full catalog of programming.

The PokerNews live reporting team will be there to bring you all the Final Table action of this event. Stay tuned for updates on the remaining six events that follow. You can check out the updates via the US Poker Open Live Reporting portal.