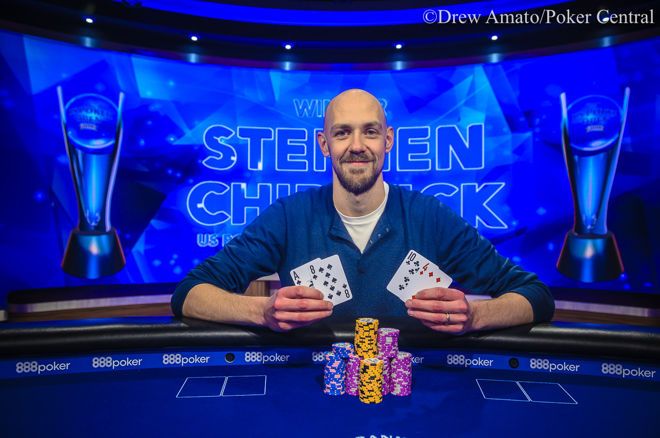 Stephen Chidwick’s success in the US Poker Open is astonishing.

“It does seem to be going pretty humorously well this week, I’m kind of expecting to wake up at some point, and winning is definitely not getting old. This is a lot of fun,” Chidwick said after his win. “It feels kinda similar, pretty unbelievable both times and I couldn’t have expected it to go any better.”

Prior to the tournament, Chidwick trailed Sean Winter in the 2019 USPO high roller points race, but he’s now reclaimed the lead with 540 points and four events left to go.

"It would be very special to win it again," Chidwick told USPO officials. "This, in my eyes, is the most prestigious thing you can win. To me, this is kind of like the $50,000 Poker Players Championship but stretched out over a week-long series. Competing with the best in the world in a variety of games would definitely be a career highlight to come out on top again."

He continued: "I don't want to get ahead of myself, there's still four events left to be played and a lot of points up for grabs in the $100k. It would be very special to win it again. This, in my eyes, is the most prestigious thing you can win. To me, this is kind of like the $50,000 Poker Players Championship but stretched out over a week-long series. Competing with the best in the world in a variety of games would definitely be a career highlight to come out on top again."

First, Katz cracked the aces of Anthony Zinno, winner of the $25K PLO event at the 2015 World Series of Poker, all in preflop after hitting a runner-runner flush. Not long after, Chidwick dispatched the short-stacked Sean Rafael, an accomplished online PLO cash game player. Chidwick flopped trip sixes and held against his opponent’s big cards.

Katz and Ben Lamb then played a big pot in which the former flopped two pair and the latter a wrap. The chips went in and Katz boated up to win the pot and send Lamb out the door in fourth place.

With three players remaining. Tom Marchese potted with queens down and Katz defended with double suited black cards. Marchese committed himself on a jack-high flop and Katz called with both straight and flush draws. He hit his club flush on the turn and Marchese was left drawing dead.

Heads-up play was a back-and-forth affair with the chip lead exchanging hands several times. At one point it looked as if Katz was destined for victory, but then Chidwick got a double to put himself back in contention. Eventually, the duo got it in with Katz holding top pair and Chidwick a pair and flush draw. He rivered the said flush and took a commanding lead. Soon thereafter, Katz got his short stack all in preflop with jacks down but Chidwick wound up turning a wheel to close things out.

Katz now sits third in the 2019 US Poker Open points race with Winter sitting between him and Chidwick.

PokerNews coverage of the 2019 USPO continues now with live updates from Event #7: $25,000 NLH, which you can follow here.