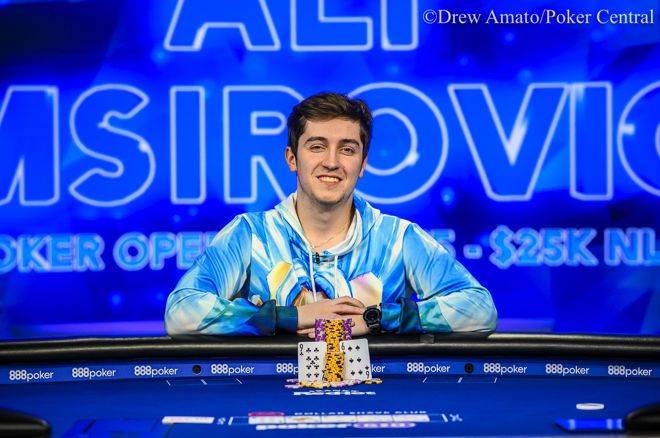 Last September, 24-year-old Ali Imsirovic won back-to-back events at the 2018 Poker Masters on his way to capturing the overall series championship and prestigious purple jacket. After taking the past couple months off from the game, he returned to the PokerGO Studio in Las Vegas and claimed another title.

"I'm much less risk-averse than other players and I'm more aggressive, so I might make fewer final tables but when I do I usually have a lot of chips and perhaps a little better chance of getting the win," Imsirovic said after the win. "Today just went so fast. As first the two short stacks doubled up but then I had back-to-back bust outs against Nick Petrangelo and Dan Shak, and the heads up with Cary didn't last too long either. If he had doubled up, however, we might've been here a while longer."

Imsirovic began the final table as chip leader, and it took him approximately two hours to close things out. First, Petrangelo got things started by eliminating the short-stacked Joe Cappello, who saw his big slick straightened out by king-jack all in preflop.

Dan Shak then won a race with pocket nines against queen-jack to dispatch Kristen Bicknell in fifth place, and a short time later Nick Petrangelo ran pocket jacks smack dab into Imsirovic’s two black aces. The rockets held and Imsirovic pulled out to a massive lead.

When Shak jammed two pair with an inferior flush draw into Imsirovic, who had trips with a better flush draw, it set up a heads-up match with the latter holding a 10:1 lead over Cary Katz.

In the final hand of the tournament, Katz check-raised all in after flopping a flush drawn, and Imsirovic called with middle pair. Katz turned more outs by turning a small pair, but he missed when an offsuit eight bricked the river. Katz, who earlier in the series finished fifth in Event #2: $10K PLO for $51,200, had to settle for second place and $295,000 in prize money.

PokerNews coverage of the 2019 USPO continues now with live updates from Event #6: $25,000 PLO, which you can follow here.