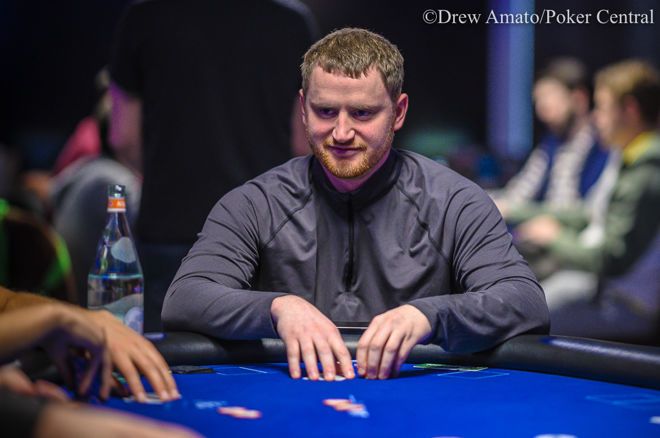 David Peters mashed his way to the chip lead in Event #4: $10,000 Short Deck Hold'em after picking up a hot run of cards late in the day.

Peters sat in the middle of the pack for the early stages of the day, but a couple massive hands vaulted him out front. First, he tripled through Justin Bonomo and Seth Davies when his ten-nine made a straight to crack kings and ace-king. Later he would knock out Anthony Zinno with jacks against queens by getting lucky and rivering a gutshot straight draw. Peters continued with that momentum and ended the night with 5,450,000. He'll lead the final table heading into Day 2.

Among others to make it to the final table was Sean Winter and Stephen Chidwick. It's been an extremely impressive series for Winter so far who has made the final table of all four events. So far he has a sixth, a fifth, and a second place finish with over $250,000 in cashes over the course of the series.

Along with Winter, Chidwick makes his third final table of the series. Chidwick has a victory and a third place so far and currently leads the points race at the US Poker Open, but they could swap places depending who runs deeper in this event.

Here's a look at how the Final Table Stacks Up:

Players played through 15 levels today and a total of 42 entrants made it into the tournament. Among those entries who didn't make it through were Alex Foxen, Sam Soverel, Kristen Bicknell, Phil Hellmuth, Cary Katz, Koray Aldemir, Manig Loeser, and Bonomo. Making another deep run was Jerry Robinson who almost had his third cash of the series, but ended up falling on the bubble when he shoved king-ten into Peter's pocket jacks. He couldn't catch up and hit the rail as the bubble boy.

Players will return at 1 p.m. local time and action will be live streamed on PokerGo from the start of the day which will begin at 2 p.m. Remember that you can subscribe to PokerGO for just $10 a month or $99 a year to watch nine straight days of U.S. Poker Open final table action plus PokerGO’s full catalog of programming.

The PokerNews live reporting team will be there to bring you all the Final Table action of this event. Stay tuned for updates on the remaining nine events that follow. You can check out the updates via the US Poker Open Live Reporting[/B].