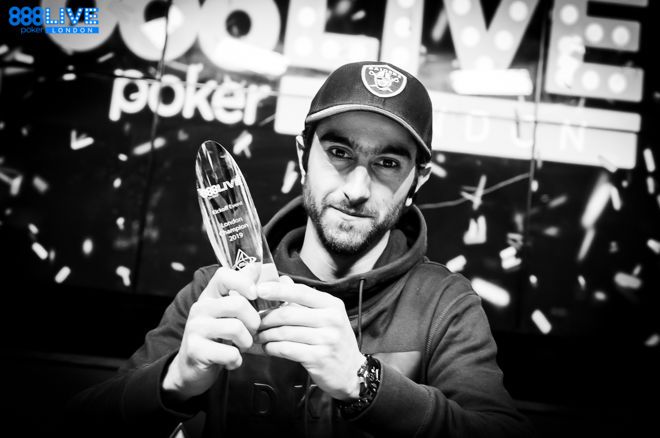 Ivelin Ganev won the 888poker Live London £440 Kickoff event at Aspers Casino Westfield Stratford City for £37,045 ($47,623) after agreeing to a four-way deal at the final table.

Ganev qualified into the event via a £120 satellite held at the casino and parlayed it into his biggest live tournament cash. The win accounted for more than quadruple the $11,439 he had amassed in live cashes going into the event according to The Hendon Mob.

The second day began with 271 players, including 31 that late-registered before the start of the day. By the end of the day, just 18 players remained.

The final day began with 18 and before long, play was down to a nine-max televised final table commentated by David Tuchman and Nick Weathall on Twitch and Facebook with hole cards exposed.

Tom Runnacles entered the final table with a commanding chip lead with Ganev near the bottom of the pack in eighth place.

The clock was paused before the remaining four players agreed to an ICM deal with £5,000 and the trophy left to play for. Runnacles guaranteed himself the biggest payout regardless of how he finished thanks to his huge chip lead when the deal was made.

"I was telling all my friends I would win a big tournament and it happened yesterday."

Runnacles entered heads-up play with the chip lead before tides changed. In a pivotal hand, Ganev three-bet with ace-nine and got a call from Runnacles with pocket fours. Ganev fired three streets and got calls all the way down after he paired the

board to take a nearly 3:1 chip advantage against his opponent.

Runnacles battled back but 30 minutes later the tournament was over. Ganev four-bet jammed with ace-king and his hand held after Runnacles called with ace-seven. Although Runnacles didn't win the top prize, with help of the deal made earlier he did walk away with a handsome prize of £39,855 ($51,235).

Meanwhile, Ganev racked up his first big win and was also awarded a 2019 WSOP Main Event package valued at $12,600, which he shared after the tournament in an interview with PokerNews' Sarah Herring was a surprise to him.

For Ganev, the win was very significant.

"It was a long-awaited moment," Ganev shared with PokerNews a day after winning the trophy. "I was telling all my friends I would win a big tournament and it happened yesterday. So it means a lot!"

*Photos and other data compliments of 888poker Magazine.