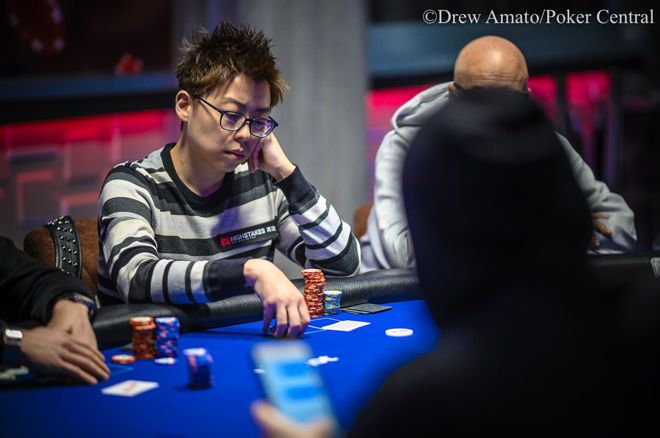 The final table of the first event of the 2019 US Poker Open is set after just over 13 hours of Day 1 play.

Cheong sat around average for most of the day: it wasn't until the unofficial final nine was formed that he started to heat up, catching a couple of his opponents trying to bluff towards the end of the night.

He ultimately found his chip lead with a pair of aces that would best the queens of Jerry Robinson, busting the latter in seventh place and setting the stage for the final table of the first event.

The day began with around 38 players in their seats when the cards hit the felt. Players took advantage of the nine levels of late registration, accumulating a total of 90 entries by the end of registration. That made for a prize pool of $840,000, with the eventual winner taking home a $216,000 first-place cash prize, along with points lead in the race to be crowned the 2019 US Poker Open Champion.

Well-known high roller Sam Soverel would be the first bubble boy of the 2019 USPO, running into the set of nines of Stephen Chidwick. Soverel final tabled this event last year and will surely be seen throughout the rest of this series.

The caliber of player to show up for the first event was of the highest standards, with some of the best in the world getting eliminated before the money bubble popped, including the likes of Ryan Riess, David Peters, Ryan Leng, Chance Kornuth, Ben Yu, Justin Bonomo, Rainer Kempe, Kristen Bicknell, Alex Foxen, and Byron Kaverman.

Action will resume at approximately 1:00 P.M. local time at the Aria Resort and Casino on Friday. The players will move to the feature table to be live-streamed with a delay. The live stream can be watched on PokerGO beginning around 2:00 P.M. and will play until the eventual winner is crowned.

The PokerNews live reporting team will be there to bring you all the Final Table action of this event. Stay tuned for updates on the remaining nine events that follow. You can check out the updates via the US Poker Open Live Reporting.