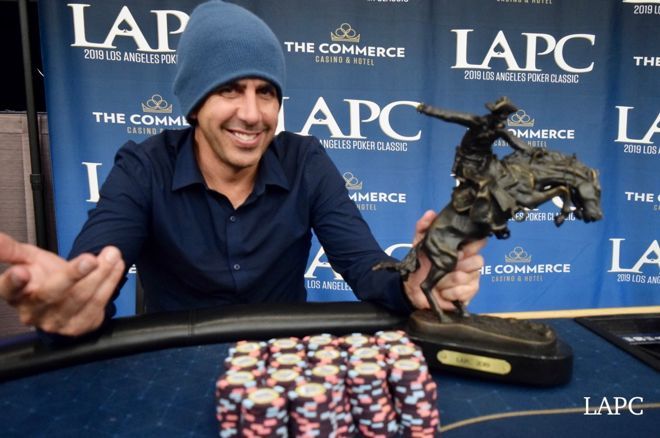 One of the heftiest prize pools of the year so far for $1K players was built up in the L.A. Poker Classic One Million event, which drew 1,770 entries.

Late Sunday night and into Monday morning, the tournament ended with Josh Prager banking $227,775 as part of a six-way chop that saw everyone walk with at least $95,000. Prager took home the big prize after having the most chips and then adding the $30,000 payout the deal reserved for the winner.

The tournament drew its massive field over the course of four starting flights, producing a prize pool in excess of $1.7 million. Some of those who got a cut of that in the 183 paid places — 140 on Day 2 — included Brett Murray, Ari Engel, Billy Baxter, poker media's own Matt Clark and Freddy Deeb.

Despite losing his lead early on, Prager scored a couple of eliminations to get back to the top.

First, he busted Haik Rostomyan in eighth, courtesy of fours holding up all in preflop against ace-ten despite two Broadway cards flopping.

Then, a short-stacked Cord Garcia got his chips in the middle holding

as an eight fell on the turn.

Mihail Morozovs, Aleksandr Gofman and Kevin Song would go home with just their negotiated amounts, leaving it to Prager, Faisal Shihabi and Sean Swingruber to battle for the remaining money.

In the end, Prager apparently triumphed over Swingruber to push past the $200,000 mark and lock up the trophy.