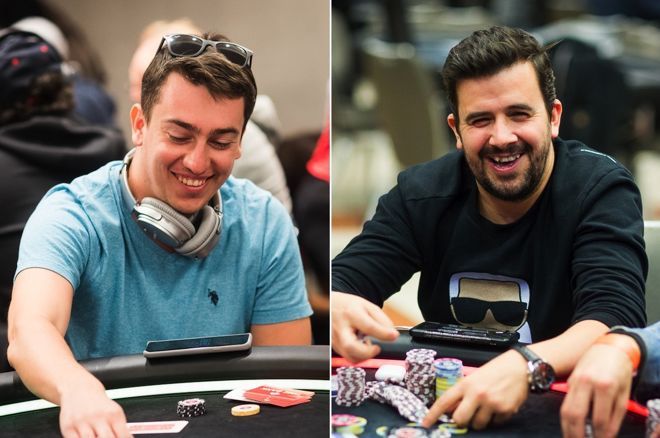 There is supposed to be more short deck hold’em content in this spot this week, but we’re going to put that series on pause for a moment in order to share an old-fashioned hold'em hand history. Certainly, this hand is as far from short deck as possible considering the final cards shown down.

This hand took place during the PokerStars European Poker Tour Prague €50,000 Super High Roller. Just five players remained and it was Level 16 (15,000/30,000/30,000), and the hand involved Pavel Plesuv (pictured above, left) and Andras Nemeth (right). At the time, Nemeth had a big chip lead with about 4 million, while Plesuv was sitting around 2.2 million.

Action folded to Nemeth's small blind, and he completed. Plesuv checked his option and

Nemeth continued barreling for 400,000 and Plesuv called after using a time bank. The river was the

and Nemeth slowed down with a check. Plesuv needed to use another time bank before opting to check it back.

“It's very unlikely this wins,” Nemeth said as he opened

for the nut low.

Plesuv smiled and showed his own missed straight draw, taking it down with

I thought this was a very fun hand and interesting in the sense that two top tournament players got the river with the stone bottom of their ranges, hands that had zero showdown value, and both elected not to bluff.

Preflop, both players opted to see if they could bink anything with their small connectors for the minimum. Nemeth flops an open-ended straight draw and decides to lead out. Perhaps his opponent missed the flop, and if not, Nemeth has equity, so it makes sense to bet.

Raising the flop seems prudent for Plesuv as he has a hand that seemingly won't have showdown value very often but does have equity no matter what since he has four outs to the nuts. Plus, pairs might be winners for him as well.

Nemeth comes back over the top, and Plesuv decides to float with his gutshot. He's probably just calling with his nutted hands as well (after all, what does a raise really accomplish on a board this dead?), so if wants to continue in the hand, calling seems fine as he's probably balanced.

is most likely a brick, so Nemeth continues barreling and gets called once more, setting up the very interesting river play.

is a bit of a bad card for Nemeth to keep bluffing on. What is he representing if he continues to fire? Most likely, if he had an eight, he wouldn't bet/three-bet the flop. Could he have eight-deuce or eight-three suited? It's questionable whether he would just complete with these hands and then play out of position against a strong opponent with a weak holding.

It feels like he'd be representing a very thin range of deuces full or threes full. It's obviously hard to deduce for sure with players thinking on such a high level, but perhaps that was his reasoning for waving the white flag despite having zero showdown value in a sizable pot where he represented strength the whole way.

When I saw the showdown, I was definitely more surprised that Plesuv didn't bluff. I think he has more strong hands in his range than Nemeth here. First, he could possibly have had an eight in his hand and raised the flop for value. He certainly has the eights full combinations that hit two pair on the flop, as he just checked his option.

Furthermore, as noted he's obviously at the bottom of his range. In theory, these hands make for good bluffs. It's hard to say what he put Nemeth on though, considering how strange of a line Nemeth took. Maybe he figured Nemeth checking river meant he had showdown value?

In the end, luckily for Plesuv, he somehow did have the winner and dragged a sizable pot.

Obviously, these players are operating on an extremely high level, so it's difficult for a small-stakes player like me to grasp what sort of ranges they're putting each other on in a spot like this. Still, I thought it was a fun hand to think about and try to figure what was going through each player's mind as each played his hand in a manner that wound up with five-high against six-high at showdown.

It's definitely not something you see very often, and operating on the farthest margins is what sets these types of players apart and allows them to play at the top level.