Mike Hahn Tops Leaderboard After Day 1a of HPT Lawrenceburg 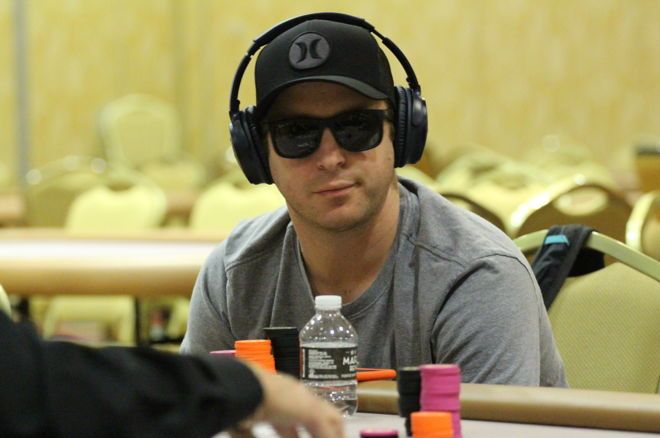 The opening day of the Heartland Poker Tour $1,100 Main Event at Hollywood Casino Lawrenceburg closed after a full 15 levels were completed Thursday night. Sneaking in under the radar, Mike Hahn captured the chip lead late in the day to top the remaining 13 players moving on to Day 2.

While Hahn was one of the most talkative players on the felt, he let his poker skills quietly surge him to the top of the leaderboard. The Indiana native should feel right at home in his home state and on the HPT. Hahn has over $1.3 million in career earnings along with a 2017 HPT Main Event title in Chicago for his biggest score of over $190,000.

Luckily for him, he stayed away from the table with the majority of the action towards the end of the night to avoid any disasters. The other big stacks at the day's end, Daniel Sepiol (399,000), Doug Holland (374,000), and Joey Hiudt (314,000) all duked it out multiple times in the latter stages. The largest pot of the day was pulled in by Holland when he flopped flush over flush against Hiudt. It turned out to be a pot of over 400,000 chips but Holland wasn't able to maintain his lead with the amount of action taking place.

The day kicked off with around 30 players taking their seats in the opening level and most notably, 2004 WSOP Main Event champion Greg Raymer was among the early hopefuls. Unfortunately for Raymer, he was unable to find some of the magic that propelled him to the top of the poker world 15 years ago and he was eliminated early on in the day.

The numbers continued to pile up in what the tournament staff considered to be a successful day with a total of 90 entries. With two more flights still on the docket, there is no question that the $250,000 guaranteed prize pool will be reached, potentially as early as Day 1b on Friday.

Some more familiar faces to take part in Day 1a included Jake Bazeley, Adam Friedman, Nick Pupillo, Bruce Hugon, Timothy Burden, Mike Scarborough, and Keven Stammen, all of which failed to find a bag by the end of the day's proceedings. They will have another opportunity tomorrow to do so if they choose, with Day 1b taking place at 2 p.m. again.

The PokerNews live reporting team will be back on Friday to bring you all of the coverage of the Main Event Day 1b flight from the tournament floor. Click here to follow the action in the live blog.