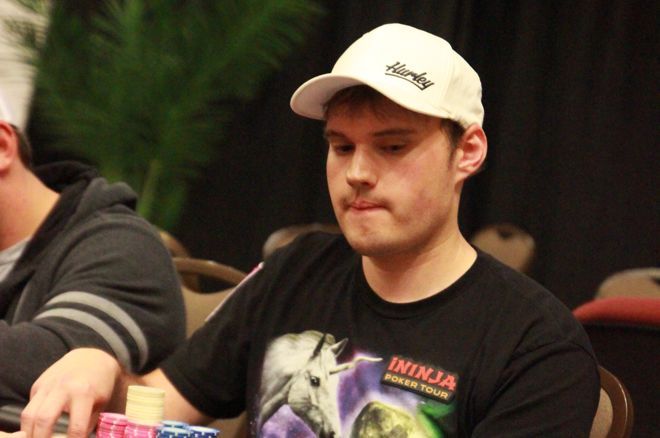 Winning Player of the Year for a poker tour is an incredible career accomplishment. To achieve this illustrious title, a player must not only compete in numerous events, but also finish extremely deep in the specific tour's tournaments, often needing to make several final tables and even capture a victory.

Last year, Aaron Johnson accomplished this feat. Incredibly though, the Minnesota native was not only POY for one tour, but he earned this achievement in two separate tours. Johnson attained the elusive double POY by earning the honor in both in the Heartland Poker Tour and the Mid-States Poker.

Having played seriously on the MSPT since in 2014, the 28-year-old rising star has worked on his game diligently over the past several years. In 2016, Johnson went deep in the World Series of Poker Main Event where he finished 72nd out of 6,737 players. Then last year in March he was rewarded with a huge breakout win on the HPT at the Belterra Casino Resort in Florence, Indiana.

Earlier this week I interviewed Johnson on my radio show, where besides discussing his remarkable double POY achievement, Johnson shared some advice for amateur players looking to break into these mid-stakes tours.

PokerNews: Congratulations on winning both HPT and MSPT POYs. Was it ever a goal of yours to win a POY at the start of 2018?

Aaron Johnson: Thank you. At the beginning of every year, I always want to make a run at MSPT Player of the Year. This was the first tour I started playing on back in 2014. I enter a lot of MSPT events since I live within driving distance of many of them. To win the MSPT POY is a dream come true, but to win the HPT POY also, especially in the same year, is truly surreal. I still can't believe it.

How did you get started in poker?

I began watching the WSOP on ESPN back in 2003 and basically started playing poker as part of the Moneymaker Effect. After learning the game, I started playing with friends in middle and high school. Eventually, I transitioned to playing online, initially for play money, but eventually made a real money deposit.

When I turned 18, I started to play live at my local casino in Minnesota, playing low limit cash games and also small stakes tournaments. After having some initial success, I decided to jump into higher buy-in tournaments throughout Minnesota. Eventually, I took a chance travelling on the MSPT in 2014 and I have never looked back.

As you started playing regularly on the tour, what are the leaks that you discovered and worked on in your game?

As poker tournaments progress, players often don't adapt well enough to the different situations they face. I found out that I was definitely one of those players. I was playing the same game from the start to when I busted out of the tournament.

To become a better player, I realized that you have to keep adapting throughout the tournament. You have to constantly focus on changing stack sizes, different opponents, increasing prize money and ICM. You need to alter your strategy accordingly.

With your extensive live playing experience over the last several years, are there any other strategies that you have learned and implemented?

One of the things that I have developed is the ability to recognize spots where players are going to be tightening up either for pay jumps or bubble situations. I definitely want to apply maximum pressure to anyone who I have recognized is going to be tortured in those situations and is scared money.

Also, when you reach the final table, understanding a good ICM strategy is critical.

That phrase "apply maximum pressure" is often thrown around by pro players, but can you clearly explain what that means to an amateur looking to start playing on tour?

First, you must pay attention to all the stack sizes at the table. Then, whenever you can threaten an opponent's stack, which is usually a short or middle range stack, without risking the entire amount, you are putting maximizing pressure on them.

Examples would be if there is someone who is short-stacked and is trying to ladder up in the money, you can definitely open into their blinds with a wider range than normal. You can also raise or three-bet an amount where your opponent has to basically fold or shove all in.

Any other final advice for amateur players?

You have to make sure that your fundamentals are very strong as compared to the players you currently play against. I would definitely focus on your opening ranges and bet sizing.

Also, pay constant attention at the table. Gaining information throughout the tournament is so valuable. I'm always trying to pick up as much information as possible. I try not to look at my phone and never wear headphones. I also try to listen to my opponents trying to figure out who they are, what their experience is and their goals for the tournament. You can really pick up a lot by listening intently and trying to use that information to your advantage.

I would say I would like to go back-to-back POY in one of the tours. I know that is a very tall task, but it would be nice to make a run at one of them.

Also, to have success and a nice run during the summer at the WSOP. I have yet to do this, besides my deep run in the 2016 WSOP Main Event.