Keller Leads After Day 1c of HPT Lawrenceburg, Bazeley Near the Top 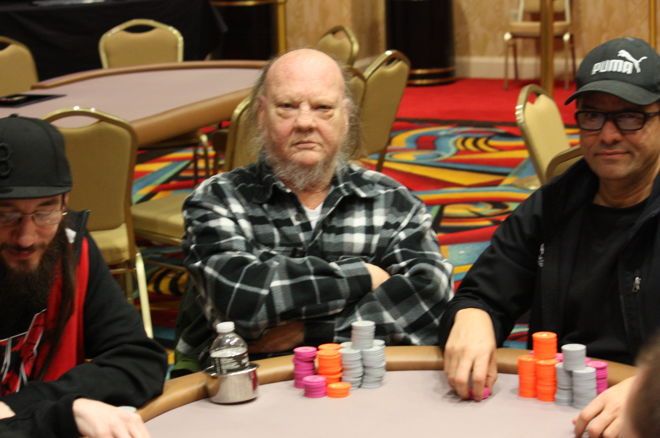 The final starting flight drew to a close Saturday night in the Heartland Poker Tour $1,100 Main Event at Hollywood Casino Lawrenceburg. With 47 players moving on from Day 1c, David Keller will return for Day 2 with the overall chip lead and 516,000 chips.

Keller remained patient throughout most of the day and timed his spots perfectly. Twice, he picked up pocket aces and got max value, tripling up one time and doubling up another. Keller managed to take over the chip lead in the latter stages of the last level as the only player over 500,000 chips.

A few more of the big stacks to move on from Day 1c include Ronnie Day (516,000), Jake Bazeley (455,000), Iverson Snuffer (431,000), and John Nelson (342,000). Bazeley is the most notable of the remaining players left in the field with over $4.4 million in career earnings. The Cincinnati native lives just a short drive away from Lawrenceburg, Indiana and is looking to pocket yet another six-figure score to add to his resume.

The ballroom on the bottom floor of the casino was packed with poker players right from the start of the day. Over 80 players took their seats when the action kicked off at Noon. The tournament staff had their hands full trying to open more tables to keep up with the number of entries throughout the registration period. When late registration closed, there were a total of 293 entries for Day 1c.

That brought the total to 555 entries for the Main Event, which more than doubled the guaranteed prize pool of $250,000. When the players return for Day 2 tomorrow, there will be $532,800 up for grabs with 63 places getting paid. There will be 86 players returning on Sunday all looking to get their hands on some cash.

There was no shortage of action in the early going on Day 1c with two eliminations occurring in the first 10 minutes of play. David Worden was the beneficiary of one those player's starting stacks but he was unable to hold on to those chips long enough to find a bag. Some other names to hit the rail include Greg Raymer, Bruce Hugon, Michael Shanahan, and James Pupillo.

The action will resume at 11 a.m. on Sunday with just over 20 eliminations away from the money. The blinds will begin at 2,500/5,000 with a 5,000 big blind ante. The levels will continue at 40-minutes in length and the schedule is to play down to the final nine players.

The PokerNews live reporting team will be back on Sunday to bring you all of the coverage of the Main Event Day 2 flight from the tournament floor. Click here to follow the action in the live blog.