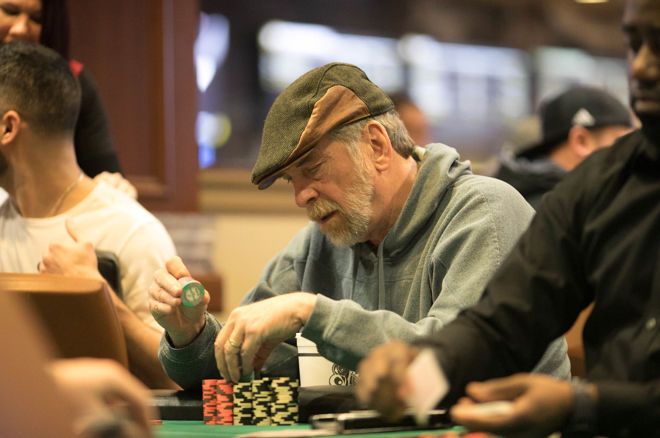 Day 1a of the RunGood Poker Series (RGPS) Tunica Horseshoe Main Event ended after 12 levels of play with Sim Therrell and his stack of 238,5000 leading the 30 surviving players, who all punched their tickets to Sunday's Day 2.

Dan “Wretchy” Martin, Clint “CT” Tolbert, and Keith Fererra all played Day 1a and busted, while World Series of Poker bracelet winner Kyle Cartwright surged late to come in just behind Therell with 178,000 after losing to a bad beat with pocket kings. Justin Gardenhire also bagged, ending the day with 128,000.

Some of the familiar local players bagged Day 2 as well including Joe Huey (117,000) and Connie Rice (30,000). John Walker, who won his seat from a single-table sit-and-go and was all in blind at one point in the tournament when short and in the big blind, also bagged a stack of 38,500.

In one of the last hands of the flight, Cartwright moved all in from early position and Huey asked for a count. Cartwright then stood up and explained that he should be the chip leader of the whole tournament, speaking of a previous hand where he lost with pocket kings to a player who made trip jacks.

Cartwright tossed $5 in the pot and told Huey it was for him and to add it to the pot. Huey called and Cartwright quickly took the $5 back. The table let out a sigh of disapproval as Cartwright took the money back. A third player joined the pot calling off for less.

As the dealer started running the board, Cartwright got up. He leaned down next to her and started calling for a nine or a heart.

"Nine or a heart," he said. The turn was the

"Heart," he said with his face almost level with the dealer. The river was the

and Cartwright made his flush.

He then got everyone's attention and stripped off his jacket while pulling up the sleeve of his t-shirt and flexing his right arm. Then he used his flexed arm to drag the pot toward him in several motions. A move the floor man referred to as the flex drag.

The flight drew 135 entries and with satellites still going on, including one at 9 a.m. Saturday morning, the total field looks to be another big number. There are two more flights Saturday with Day 1b and 1c at noon and 7 p.m. local time respectively. Keep up with all the updates in the live blog here.