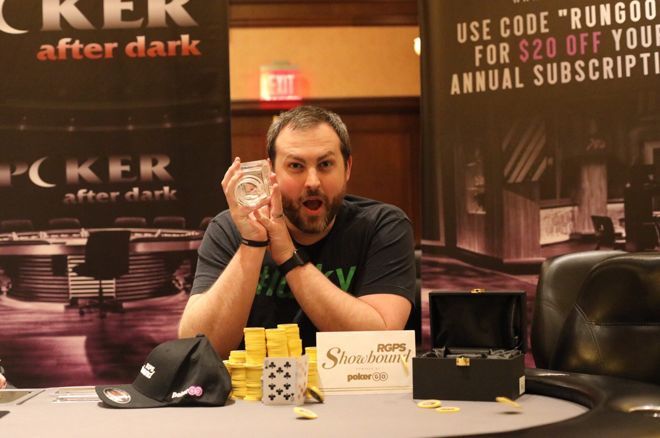 Over the weekend, Nick Burris topped a field of 399 entries to win the $100,000 Guaranteed Run Good Poker Series Main Event at Horseshoe Council Bluffs. This was the first stop on the RGPS tour, and the $575 buy-in Main Event capped a great weekend.

Burris will take home $44,767 for his finish and the Showbound trophy. Burris secured the victory when he three-bet shoved pocket tens into the ace-jack of hearts of MSPT Grand Falls Regional Event champ Travis Gant, who finished in second place.

Additionally, all the final table players earned a seat in the end-of-season Showbound satellite where Run Good players will have a chance to play on Poker After Dark in a $5,000 sit and go.

"I still want a bracelet, but I really wanted a Run Good Main title," Burris said after the win.

Burris took the lead six-handed and rode that wave to victory after hitting some choppy waters early in the final table action. He's been playing poker off and on but took some time off from playing when he had two young sons, who are now three and one.

When he's not playing poker Burris runs an insurance business near Kansas City. He's been a part of the famous "Monday Night Poker Crew" for four years after he got randomly invited.

Burris earned the nickname "Re-Burris" for breaking Blair Hinkle's rebuy record very early in his Monday Night Poker career. For those unfamiliar, Monday Night Poker is a Kansas City home game that Blair and Grant Hinkle attend along with Jeff Tebben, James Mackey, and Paul Strohm among others.

They refer to it as the best $40 home game in the world. In that game, Burris managed to put in 22 rebuys in one hour, a record that stood until recently.

The players reached the final table when Blair Hinkle busted with queens versus the aces of Tai Phan. Then Michael Childers ran into the aces of Gant, the second place finisher, to finish in tenth place.

Next to go was Scott Lodes, who went on a bit of a roller coaster ride and eventually fell in ninth place when Burris got in slightly behind with ace-jack but flopped a jack to beat the ace-queen of Lodes.

The overall Day 2 chip leader, Jovan Sudar, hit the rail in eighth place. He picked up pocket fives and flopped a set, but felt he was doomed when Eric Atchison turned an open-ended straight draw. He made it and eliminated Sudar. Atchison would eventually finish third, busting to Burris with ace-deuce against Burris's pocket fours.

Shane Fuller fell in seventh place when he got his over pair in on an eight-high board against Nicholas Stille, who had flopped a straight. Stille would finish in fourth place after losing two all ins to Gant in three hands.

Thadd Wolf bagged the biggest stack in Day 1c and was looking primed for a deep run. He ran pocket jacks into Burris's kings to finish in sixth place.

Phan was the fifth-place finisher after losing a race to Stille with ace-queen against pocket nines.

This was Burris's biggest cash to date and his first Run Good Main Event victory. This wraps up the first stop of the season for the Run Good Poker Series. PokerNews will be bringing you updates all season long including from the next stop February 19-24 at Downstream Casino in Joplin, Missouri.