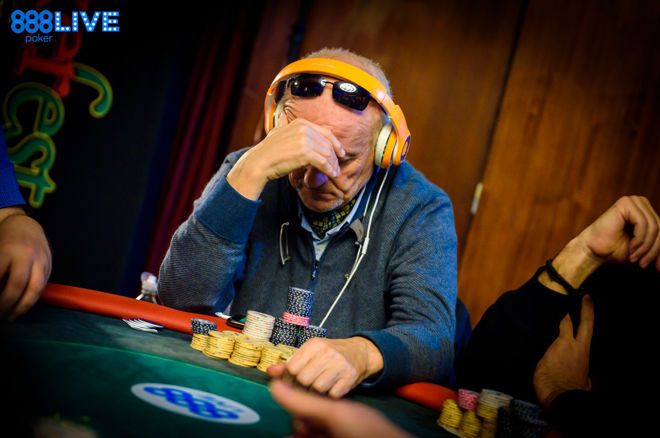 The second of four starting days of the 2019 888poker LIVE Bucharest Festival €888 Main Event promised a bumper field and had already eclipsed the Day 1a field in the second level of the day. Once the registration closed at the end of level eight, a field of 133 entries had emerged in the ballroom of the Intercontinental Bucharest Hotel and that field was cut by more than half at the end of 12 levels of play.

With 200 entries in total after two flights, the flagship event of the festival, in cooperation with PokerFest Romania, is on track to surpass the guaranteed prize pool of €300,000 and the eventual champion can look forward to the coveted 888poker LIVE trophy, a hefty payout and a 2019 WSOP Main Event package worth $12,600, provided by World Series of Poker sponsor and host 888poker.

In a tight race for the Day 1b lead among the 47 players that bagged up, it was Aldo Monteleone who claimed the top spot with 206,000 in chips. He is followed by Gennaro Proscia (196,000) and Radu Lungu (185,800). Proscia skyrocketed into a massive stack early on and dominated before and after the dinner break, but had to settle for the second-biggest stack eventually.

Defending champion Andrei Racolta, who had been eliminated on Day 1a, gave it another shot and advanced with a stack of 50,600 to keep his title defense alive.

For the 888poker team, it was a rough day at the tables, however, as Ana Marquez, Chris Moorman and Sofia Lovgren all ran out of chips. Marquez had a nearly identical bustout hand as the previous day when her ace-queen came up short against pocket queens. All three are expected to join again for Day 1c, along with fellow 888poker ambassador Martin Jacobson.

All of the busted still have another two shots at making Day 2 with Day 1c kicking off at 1 p.m. local time and the turbo heat, 1d, scheduled for 9 p.m. local time.

Siiri Saar has a few cashes on home soil and other destinations to her name already and is part of the Estonian live stream crew. She was sweated by her colleagues on the way to claiming the title in the €60 Ladies Event, taking home €403 in a field of 19 entries. Saar entered heads-up against Mirela Marin with a massive lead, but was at risk once before a crucial double sealed the win.

On top of the money and bragging rights, she also received a package for the 888poker LIVE Barcelona Main Event at the end of May 2019 and may need to look for a replacement for the livestream duties. Carmen Zainescu and Aleeyah Jadavji rounded out the paid spots.