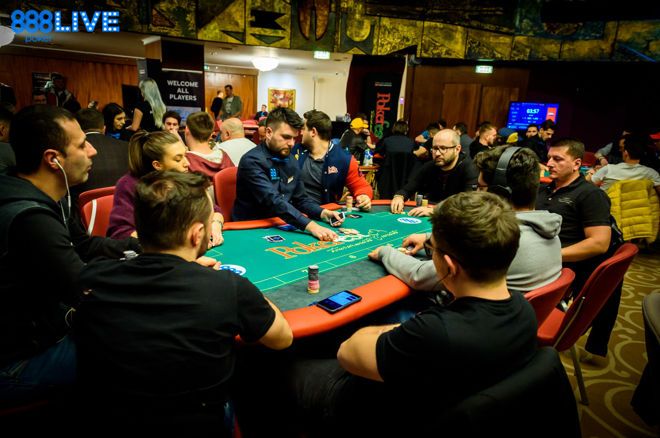 The first of four starting days of the 2019 888poker LIVE Bucharest €888 Main Event finished with 17 players out of 67 remaining and it was Marian Virlanuta that bagged up the chip lead in the ballroom of the five-star Intercontinental Bucharest Hotel.

For Dedusha, it was a roller coaster day after he entered late and immediately found himself next to his best friend Kfir Ivgi as well as Carmen Zainescu. Dedusha got short, chipped up and hit a hot streak after the dinner break to become a contender for the chip lead. But a lost flip with ace-queen versus pocket tens cut his momentum short and the Brit finished in the middle of the pack.

Marquez was left short early on and failed to get there with ace-queen versus queens. Racolta lost a flip with pocket nines against the ace-queen of Niste. Fellow countryman Pandilica had two rough beats: First his queens were cracked by ace-queen as Stuart Sewell spiked an ace on the turn, then a flopped set of deuces could not hold up against a straight and flush draw.

All those that busted on Day 1a can re-enter in any of the remaining three starting days. In the meanwhile, one of the Side Events has already crowned a champion. The €230 Opening Event, which drew a total of 300 entries and surpassed the guaranteed prize pool of €50,000, saw 47 players return for Day 2. Only the top 36 spots were ensured a portion of the €56,400 in prize money and the event ended with a deal, with five and three players remaining.

Another three flights remain for players to join the action in the €888 Main Event and take home a portion of the €300,000 guarantee. Day 1b will kick off on Wednesday, March 6th, at 1 p.m. local time and the PokerNews team will be there to cover all the action until a champion is crowned.

Only 24h Left to Activate Your Last Two Carnival Bonuses