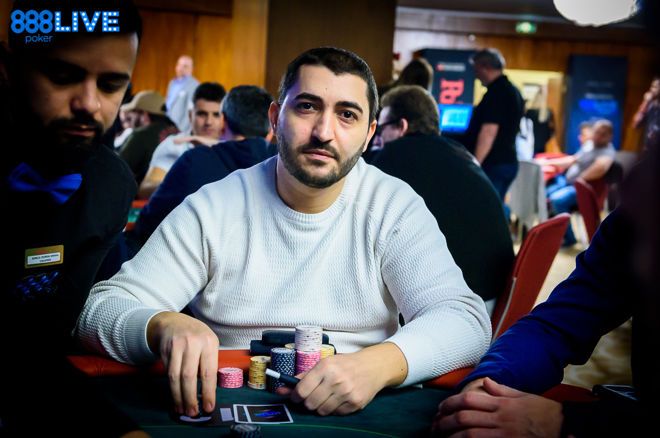 A big field was expected for the third and final regular starting day of the 2019 888poker LIVE Bucharest Festival €888 Main Event and the ballroom on the first floor of the Intercontinental Bucharest saw poker players from near and far join the action to create a field of 228 entries.

Along with the 77 entries in the turbo heat 1d that kicked off at 9 p.m. local time, a field of 505 entries emerged to easily surpass the guaranteed prize pool of €300,000 and even beat the 469-entry strong field of the previous year at the JW Marriott Bucharest Grand Hotel.

After 12 levels of 40 minutes each, only 68 players bagged up chips and it was Vasile Rablou that topped the Day 1c counts with a stack of 257,000. Rablou became one of the early big stacks when his turned full house bested the flopped nut flush of Levente Pal. Rablou remained near the top of the leaderboard throughout the remainder of the day and was in the pole position when all was done and dusted.

Another familiar face in the top 10 counts for Day 1c is 888poker ambassador Sofia Lovgren. The Swede entered late and quickly ran up a stack, then spent the late stages of the day alongside big stacks Alsharif Osama Zeid and Eugen Chiva. Lovgren ended the day with the fifth-biggest stack of 192,700 behind Ran Shahar (219,200), Bahadir Hatipoglu (212,300) and aforementioned Chiva (199,000).

The 888poker ambassadors Chris Moorman and Martin Jacobson were eliminated on Day 1c, but had another shot at making Day 2 in the turbo heat 1c in which they were even sat next to each other. Jacobson's first bullet came to an end with ace-queen against pocket queens and he tried one more time without success.

They weren't the only notables from the international poker circuit that had to leave Day 1c empty-handed without anything to show for. Marius Pertea, Eusebiu Jalba, Carmen Zainescu, Kfir Ivgi, Traian Bostan, WSOP bracelet winner Alexandru Papazian, Johan Guilbert, Omar Lakhdari, Nandor Solyom, and Vladimir Velikov were among the casualties. In fact, Pertea was among the first to bow out, gave it another shot and busted during the final hands of the night when he jammed the button with king-six and was called by Bogdan Berinde with ace-ten.

At least 131 players will return for Day 2 and they will be joined by all survivors of the ongoing turbo heat 1c, which had already attracted more than 80 entries with late registration still available. The action continues at 1 p.m. local time with 40-minute levels until the final table has been reached. All four 30-second time banks will be replenished at the shuffle up and deal, and the prize pool information will also be published soon after the cards are back in the air.

Day 2 recommences with blinds of 1,000/2,500 and a 2,500 big blind ante, and the action on the feature table will be streamed on the 888poker social media channels after the first break of the day. The PokerNews team will be there to cover all the action until a champion is crowned.