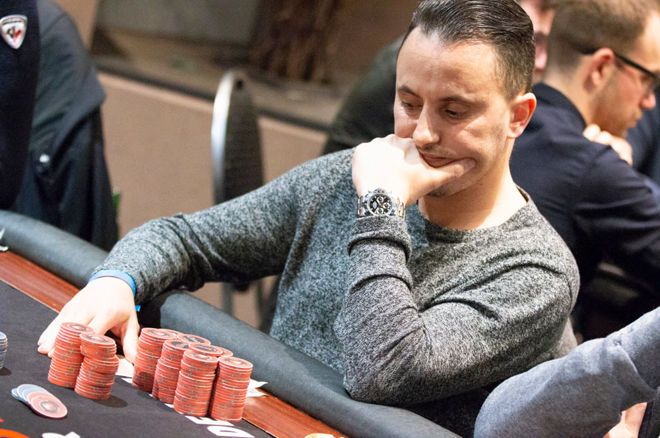 There are 46 players remaining in the €225 Lex Live Namur Main Event. The event, held in Grand Casino de Namur[/B, Belgium, had a total of 1,064 entries and the remaining 46 players will battle it out on Sunday for the first-place prize of [B]€37,105. All are guaranteed to take home at least €708.

The day started with a flurry of busts. It wasn't a great day and especially not a great start for the Lex Veldhuis community. A couple of the players that busted out in the first fifteen minutes of the day included Markus 'L4zy_pigeon' Borel, Ben 'TheBenMartin98' Martin, Tjenno 'TjennoE' Eskes, moderator 'Croaks', and Lex Veldhuis himself.

Veldhuis busted after he found pocket tens with only six big blinds. He had to win a coin flip against two overcards, but he couldn't recover when his opponent flopped two pair. Another Team PokerStars Online pro that didn't make it very far was Benjamin 'Spraggy' Spragg. The Twitch streamer busted out in the first level of the day as well. The only player from the community that did make it through to Day 2 is Tomislav Savov. The Bulgarian, going by the name 'JustX'online, bagged 505,000 and he is one of the shorter stacks left in the tournament.

Kalidou Sow, Jérôme Sgorrano, and Belgian actor Tom Dingenen busted in the last level of the day. They all cashed for €708. The registration of the €550 Golden Beaker High Roller is still open, however, and they can register before the start of Day 2 at 3:30 p.m. local time.

Earlier in the day, Veldhuis had a pub quiz with sixty questions about himself and the stream. After fifty questions, he announced that the top four would play a tag team style sit and go before the start of Day 3 of the Main Event. Sanne 'Antim00n' Bombeek, Milko 'Milkovw' van Winden, 'TjennoE', and 'TheBenMartin98 ended in that top four and they will be partnered up with either 'Spraggy', Fintan 'EasyWithAces' Hand, Felix 'xflixx' Schneiders, or Veldhuis himself. They are all guaranteed to take home at least €500 with the winner cashing for €3,000.

The Lex Live Main Event will continue with 46 players remaining in the tournament at 3 p.m. local time. PokerNews will be there at the start until the winner is crowned in the first inaugural Lex Live Main Event. Follow along with Lex Live updates by visiting the PokerNews Live Reporting section.