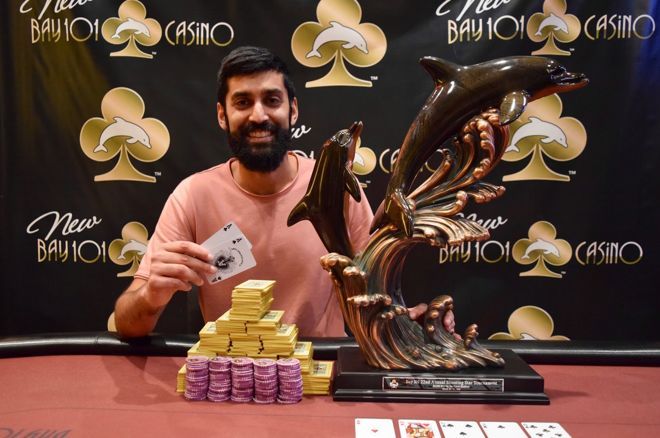 Bay 101 Shooting Star entered a new era, running their flagship $5,200 tournament with special bounties as a stand-alone event for the first time after being under the World Poker Tour banner since way back in Season 2 in 2004.

Sandeep Pulusani prevailed over Ryan Tosoc in a comeback effort after the two chopped most of the remaining prize money heads up. Pulusani, a 2013 WSOP bracelet winner, added his second six-figure cash to his ledger as he collected $354,400 while fellow bracelet winner and former WPT champ Tosoc got $336,500.

The event drew 440 entries at an adjusted price of $5,200, down from the $7,500 in 2017 the last time the event ran. Whether it be the price or the lack of WPT prestige, that was considerably below the 800-plus entries that Sam Panzica topped to win nearly $1.4 million a couple of years ago.

Still, a prize pool over $2 million is nothing to sneeze at, and plenty of notable players turned up for the San Jose event. Some of the ones making the 55 paid places were Ari Engel, Anthony Spinella, Brian Altman, Mohsin Charania and Michael Dyer.

Tosoc ran hot on the way to the final table, but it was Loni Harwood who grabbed the lead heading into the final day after she got aces over kings of Hiroaki Harada with seven left, according to the live updates.

That same situation presented itself shortly thereafter, and it was Pulusani on the wrong end with kings against Steve Kim's aces. Kim turned a set but Pulusani hit a straight on the river to bag a decent stack, though Harwood and Tosoc were well ahead of the field going into the final day with five left.

John Andress was the shortest stack left on the final day but had nearly 50 big blinds so there was plenty of play left for everyone. Meanwhile, both Harwood and Dan Shak still offered the possibility of bounty wins for their opponents.

blind versus blind against Harwood, who flopped the nut flush draw and called when Pulusani check-shoved. She didn't improve and Pulusani doubled past her to 3 million at 15,000/30,000/30,000.

Harwood got all the way down to the shortest stack but was able to avoid a fifth-place finish when she picked up jacks in the big blind and Andress ripped in over 25 bigs on the button with fives. Harwood was slightly covered but Andress couldn't run up his last big blind he was left with.

Harwood's run would end in fourth when she got in a flip with Tosoc, whose eights made a straight on the river after Harwood paired up with king-queen on the turn.

on the felt, Shak and Tosoc played a huge pot with Shak holding

Tosoc was up more than 2-1 and had over 200 big blinds after collecting the last bounty in the event. The two players made a deal where each locked up $300,000-plus and levels were cut to 60 minutes.

Pulusani got all in preflop with kings against fives, calling a four-bet ship, and he doubled into the lead. After about another hour, Pulusani got Tosoc's remaining chips in the middle with Pulusani holding bullets and Tosoc just

. The flop brought an ace and Pulusani had it locked up on the turn for his second biggest live cash and win.