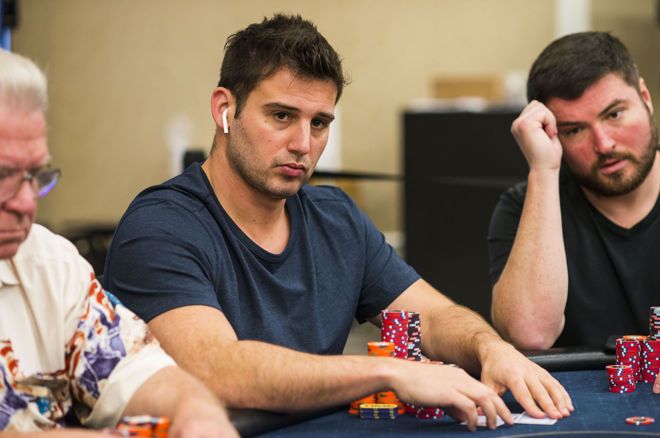 Darren Elias already has the record for most World Poker Tour titles won with four, but it seems he's trying to put more distance between himself and the rest of the field.

After five days of play, the WPT L.A. Poker Classic $10,000 Main Event is down to its final six runners, with Elias holding a very wide chip lead of about double the stacks held by nearest challengers Matas Cimbolas and David "ODB" Baker.

With the winner set to bank over $1 million, a win here would not only solidify Elias as the top player in WPT history, it would also secure him the biggest cash in a career that's seen him rake in north of $6.6 million in live tournaments.

Here's how things stand heading into the delayed final table, set to play out on March 11 at HyperX Esports Arena Las Vegas at Luxor:

The freezeout drew 546 entries, a significant bump over last year's 493, possibly due to a renewed satellite push headed by WPT Executive Tour Director Matt Savage. That big field meant over $5.1 million in the prize pool and 69 places paid. In a tournament like this, the list of cashers is naturally full of recognizable names, with Billy Baxter, Ankush Mandavia, Gordon Vayo, Dan Shak and Mike Matusow among those making the money but busting before the final day.

Baker bagged Day 3 and Day 4 leads to head into Day 5 with over 180 big blinds, according to the live updates.

Former WPT champ Andy Frankenberger made Day 5 as the shortest stack, but he was the first player to bust out when he ran jacks into Steve Yea's aces.

The monster flip went to Elias as he flopped an ace and rivered a king for good measure, stacking up to about 5.4 million.

after each player paired his kicker. That led to a final table redraw as three more would be eliminated before everyone would be paid out sixth-place money and the tournament go on ice for a few days.

Soon after Elias won a huge pot off Baker to secure himself the lead when he flopped a set of jacks on an ace-high board in a three-bet pot. Elias check-called two streets and then came out firing with a bit river bet on

to get paid off on the end.

The four-time WPT champ followed by busting short-stacked Mike Meskin in ninth and then taking some chips from Paul Fontan to help hammer him down to 10 big blinds. Baker would then finish off Fontan in eighth in a flip.

It took several hours for the official final table bubble to burst, during which time Elias actually handed out a number of doubles to short stacks. However, he still increased from around 6.5 million to over 8 million by winning plenty of other pots.

. Neither player improved, so the queen kicker busted Carroll in seventh and boosted Elias over 9 million.

That leaves the final six to play out the remaining tournament in Las Vegas along with two other WPT final tables. Interestingly, Cimbolas and Elias both have experience on the stage after appearing at the WPT Tournament of Champions final table last year, where they finished second and third, respectively.

Here's a look at what the remaining six players are playing for:

While the WPT LAPC Main Event grabbed the headlines over the past few days, it wasn't the only big tournament wrapping up at Commerce Casino since PokerNews laid out some of the results from the festival.

There was also a $25K High Roller, which drew 28 entries, just a hair over the 27 defeated by Rainer Kempe in the first $25K.

As fate would have it, the other half of Kempe's relationship, Maria Ho, collected the trophy and $276,690 after the final card was dealt. It's her first Remington and her second-largest cash after coming second in a bracelet event in 2011.

With that, LAPC has concluded save the completion of the delayed final table. To markthe end of the series, Savage had some words for all of the participants.

"Sixty-nine events in 50 days and the LAPC is over," he tweeted. "I want to thank all of the dealers, staff and especially the players for making this one of the best L.A. Poker Classics in its 26-year history."