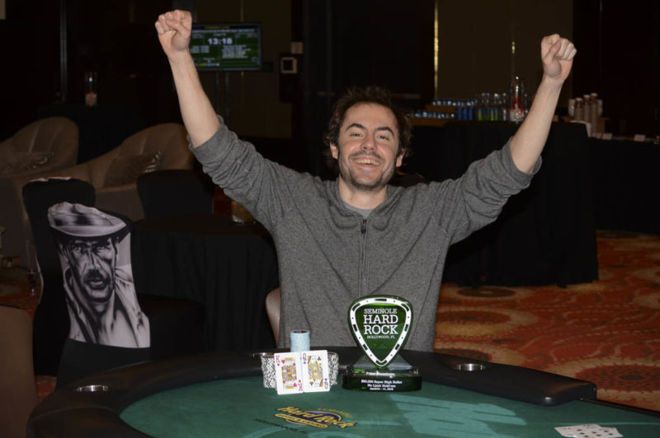 The 2019 Seminole Hard Rock Poker Showdown kicked off with Nick Ahmadi winning the opener for $210K and will culminate with the $3,500 buy-in, $3 million GTD World Poker Tour Championship this weekend (April 12-16),

In between, a series of preliminary events have been playing out, two of which recently crowned six-figure winners.

The 2019 Seminole Hard Rock Poker Showdown Event #14: $50,000 Super High Roller (Single Re-Entry) attracted 20 entrants, which just met the $1 million guarantee, albeit rake-free. That meant the top four got paid and unsurprisingly they were a familiar lot with 2018 Global Poker Award winner for “Breakout Player of the Year” Ali Imsirovic finishing fourth for $120,000.

“It was a really tough tournament, and I love playing with the group of guys that was here."

He was followed by Alex Foxen and Sam Soverel, who finished third and second for $180K and $260K respectively. Finishing on top for $440,000 was Elio Fox (pictured above), who during the 2018 SHRPO series won the same event for $500,000. That was the last Super High Roller held at the Seminole Hard Rock, which means Fox essentially went back-to-back and defended his title.

“It feels great,” Fox told tournament officials after the win. “It’s always wonderful to start out a trip doing well – makes it easier the rest of the way.”

In the final hand of the tournament, Fox limped holding king-queen and Soverel raised with pocket fives. Fox limp-raised enough to put Soverel all in, and he called it off. The flop and turn kept Soverel in the lead, but a king spiked on the river to give Fox the win.

“It was a really tough tournament, and I love playing with the group of guys that was here,” Fox added. “I play with them a lot, and I’m really happy to have won.”

Rich Alati is perhaps best known for winning a prop bet against Rory Young late last year. In it, Alati had to spend 30 days in a blacked out, soundproof bathroom. He won it after just 20 days when Young bought out. Now, Alati is adding tournament champ to his résumé.

“Rich Alati, just emerging from his month of solitary confinement and still squinting under the bright lights, is victorious,” joked Darren Rabinowitz after Alati took down the 2019 Seminole Hard Rock Poker Showdown Event #9: $1,100 NLH Re-Entry, a tournament that drew 689 entrants and crushed its $250K guarantee by creating a $668,300 prize pool.

Alati reached heads-up play holding 10.225 million (82 bb) to Sam Panzica’s 7 million (56 bb), and the duo opted to strike a deal with the former claiming the trophy.

“The prop bet definitely helped to get me centered,” Alati told tournament officials. “It gave me some time to reflect on a lot of things. It helped me be more patient at the table, more calm, and to think logically.”