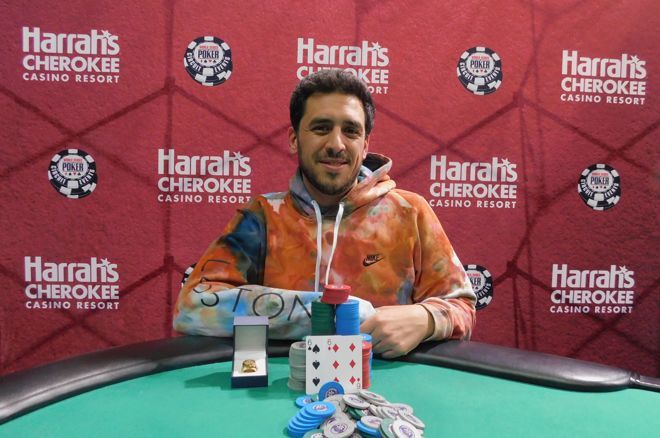 One of the biggest World Series of Poker Circuit stops of the season wrapped up on Monday with Jonas Wexler winning Harrah's Cherokee $1,700 Main Event. Wexler won $300,536 for getting through the 1,087-entry field and collected his second gold ring in the process with the first one coming way back in 2011.

Always one of the premier stops on the Circuit with its massive prize pools and big cash game action, even an Easter weekend scheduling of the Main Event couldn't stop it from eclipsing 1,000 entries and $1.6 million in the prize pool.

According to the live updates, Wexler set himself up for the deep run by holding with kings in a four-way all in that forced the two-table redraw. He was up against queens, ace-king and sixes, and the cowboys held on unimproved to notch a rare triple bustout and power Wexler to the final day as co-leader less than a big blind behind Dennis Brand.

against her kings and Aaron Gunn's jacks. Luckily for Wexler, he found an ace on the flop and survived.

After Noah Shefrin's elimination, Wexler got tricky and overcalled with queens. A short-stacked Brand tried ripping in from the big blind with

, so the trap worked to perfection when the opener called and folded to Wexler's back-shove. The queens held and Wexler was in business over 70 big blinds six-handed.

to keep the momentum going. Patel tried getting one past him with

as well and Wexler had the goods with tens to bust her too.

Phil Hernz, who had moved into the lead early on the final day, busted Steven Grybas with nines over sixes to move past 50 percent of the total chips. He only moved up from there, hammering Spencer Champlin down to 20 big blinds so Wexler could finish him with kings over ace-jack.

Hernz had just over a 2-1 lead on Wexler but the latter still had 50 big blinds so plenty of play remained.

Wexler doubled into the lead early when he flopped an overpair with jacks in a three-bet pot and Hernz flopped top pair of tens and failed to improve. Less than an hour later, it was over when Hernz jammed 20 big blinds on the button with

and Wexler called with pocket sixes and flopped a set.

While Wexler secured a seat in the $1 million guaranteed Global Casino Championship, another would go to the Casino Champion who accumulated the most points at the stop.

For the spring Harrah's Cherokee series, that honor went to Tyler Phillips. Phillips would not secure any ring wins, but he did put together six cashes and two final table runs, including a second-place finish in the $400 Six-Max for $22,629. He also final tabled the big multi-flight event, finishing seventh for $24,680 in a monster field of 3,186.