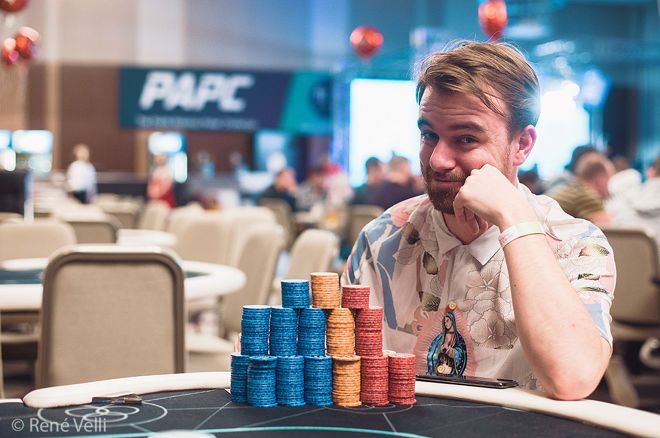 The second of four days in the €1,500 Patrik Antonius Poker Challenge Main Event had one man claiming the spotlight: Joris Ruijs. The Dutch high roller went on an absolute rampage during nearly eight levels of sixty minutes and bagged 1,242,000 to conclude the day.

In comparison, it was nearly three times as much as Kasper Mellanen, who bagged the second biggest stack with 423,000 in chips. Play continued until the bubble had burst and 20 out of 160 players will return for Day 3.

It was one of those days where Ruijs seemingly couldn't do anything wrong. While a lot of raises got through, whenever Ruijs got looked up he had the goods. Julius Schamburg became one of the biggest victims of Ruijs' dynamism.

Schamburg wielded the second biggest stack when he got moved to Ruijs' table, but lost multiple sizable pots against the Dutchman. One big pot especially, where Ruijs had flopped a flush and got paid, relegated Schamburg to spectator status in the Ruijs show. While left severely bruised, the German did survive and will return to the penultimate day with 119,500 in chips.

While the young Dutchman was raking in the chips, others fell by the wayside and failed to make the money. The trio of Chino Rheem, Noah Boeken, and Robert Mizrachi, all good friends of Patrik Antonius, saw their attempt to win their friend's tournament end early in the day.

Day 1 chip leader Dragos Trofimov also failed to make the money, and was joined on the rail by Micha Hoedemaker, Jason Gray, and loudmouth Veki-Pella Alakorva, who's daring king-high bluff got picked off by Kasper Mellanen two spots before the money.

Alakorva busted shortly after his ill-timed attempt, leaving the field with 21 players. They played hand-for-hand for a while before two players were all-in and at risk. Roope Tarmi was called holding ace-king on an ace-high flop, but top pair top kicker remained best to keep him alive.

Sergei Istsenko was less fortunate: with pocket kings, he ran into the dreaded setup as Kaupo Tenno woke up with pocket aces to send the Russian home empty-handed.

The 20 remaining players bagged for the night directly afterward, each of them already guaranteed €2,820 for their efforts, and will return on Saturday, April 6 at noon local time to play down to 6. The winner will be crowned on Sunday, April 7, and will receive €57,200 as well as the bragging rights that come with becoming the first-ever PAPC Main Event champion.

Action at the Olympic Park Casino in Hilton Tallinn is continuing with the Player's Party downstairs, where the First Land of Poker (FLOP) app will be launched. PokerNews will cover the launch of this new social app in a separate article and will be back on the floor on Saturday as the Main Event inches closer towards a champion.