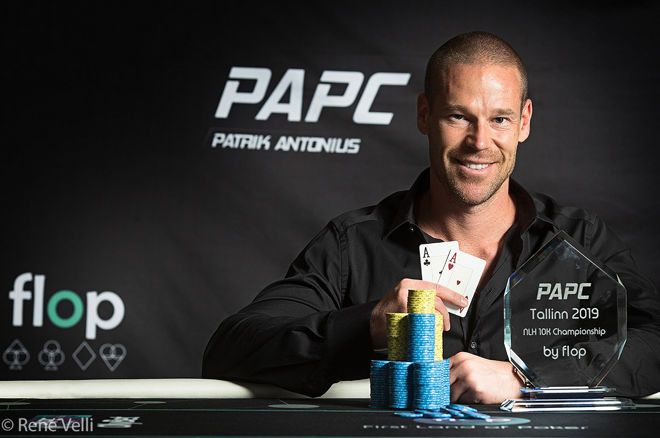 The Patrik Antonius Poker Challenge (PAPC) at the Olympic Park Casino and the Hilton Tallinn Park has been a huge success with Estonian records broken for both cash games and tournaments.

The festival's namesake Patrik Antonius won his first trophy of the festival after finishing on top of a field of 20 entrants to win the PAPC €10,200 Championship Event for €78,100. The Finn's dominating performance was punctuated by the fact that he single-handedly eliminated every opponent at the final table.

Antonius was already Finland's most successful tournament player of all time and inched closer to $12 million in career tournament cashes with the victory.

The Finnish poker legend was thrilled about winning the trophy.

"It's always a very good feeling to win a tournament," shared Antonius in the wee hours of the morning after his win.

The tournament began at a fast and furious pace with nine players battling it out. There were a total of 10 re-entries during the seven 20-minute levels during which registration was open. Antonius accounted for three of the entries, the third being the charm. Jussi Mattila joined right before the late-registration period closed to make it ten unique players plus ten reentries for a €195,552 prize pool.

American James Romero was the first player eliminated after late registration was closed. Netherlands' Teun Mulder and Canada's Timothy Adams were next on the rail and the tournament consolidated to a seven-handed final table.

Netherlands' Joris Ruijs, who is also the chip leader heading into the final table of the PAPC €1,500 Main Event on Sunday, April 7, was by far the chip leader to kick off the final table with more than double the chips of his nearest competitor. India's Rahul Byrraju, Finland's Joni Jouhkimainen, and Antonius were in the middle of the pack with Robert Mizrachi, Koray Aldemir, and Mattila all bringing short stacks to the table.

Antonius first eliminated Aldemir when he made two pair on the turn with seven-deuce to best the German's pocket eights. He then took out Mattila when his ace-eight suited outflopped his opponent's pocket sixes.

Earlier this festival, Antonius was eliminated three times in the PAPC €25,000 High Roller either when he had or was against queens but the ladies were kinder to him in the PAPC Championship Event. The first big spot where queens worked out was when they held after he called a jam from Mizrachi, who held eight-six, to send his opponent to the rail on the bubble.

Byrraju was the first player out in the money in fourth place for €20,102 after he unsuccessfully jammed ace-trey into Antonius' pocket tens. Shortly after, Antonius eliminated Ruijs in third place for €38,800 after his king-eight held versus queen-six.

Antonius and Jouhkimainen agreed to take a 30-minute break before embarking on an epic heads-up match lasting more than 2 1/2 hours. PokerNews streamed the first 30 minutes of the match live on Facebook after the action resumed.

In a pivotal hand, Antonius got it all-in with pocket queens and spiked a set against Jouhkimainen's pocket kings. Jouhkimainen was left with crumbs after the hand and got the rest in shortly after with jack-five only to run into Antonius' pocket aces.

Jouhkimainen didn't win the trophy but the €58,550 did push the Finn past the $3 million milestone in lifetime cashes according to The Hendon Mob. Meanwhile, Antonius will take home a trophy with his name on it and will be back in action on Sunday to play some more high stakes cash games to be live streamed from the casino stage.