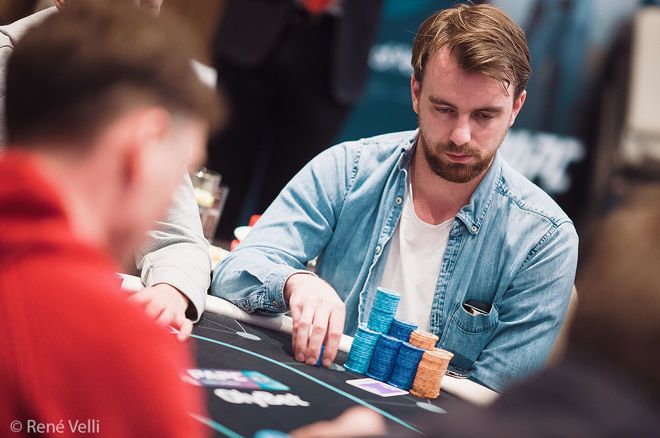 After one of the shortest penultimate days ever to be played at a poker event, clocking in at just under 2.5 hours, the final table of the €1,500 Patrik Antonius Poker Challenge Main Event has been set. On a day that played down from 20 to the final 8, Joris Ruijs was unstoppable once again and continued the onslaught he started yesterday, eliminating seven more players today to amass a monster stack and making him the odds-on favorite to claim the first-place prize of €57,200.

The day was scheduled to be short, but having play suspended in just the third level of the day was beyond anyone's expectations. Ruijs was largely responsible for it: after setting the tone by busting Roope Tarmi in the first hand of the day, he picked off several more along the way to nearly double his stack throughout the 2.5 hours.

The seemingly unstoppable Dutchman will return to the final day with an astonishing 2,254,000 in chips, over two hundred big blinds and 47% of the chips in play. To put his lead into perspective, Marvin Hannemann is second in chips with 645,000, trailing the chip leader by more than 3:1. Hannemann will be seated two to Ruijs' left at the final table, giving him at least some positional advantage to defend himself against the monster stack.

Kasper Mellanen (493,000), Andrejs Punka (475,000), and Ville Jantunen (461,000) round out the top five, and all of them have well-padded stacks when action resumes on Sunday. The short stacks belong to Matias Arosuo (187,000), Markku Koplimaa (139,000), and Sebastian Wahl (127,000), who each will have to try to spin it up from below the 20 big blind mark. Koplimaa is one of the strongest tournament players in Estonia with over 500k in lifetime winnings, and a win here would move him up to second on his country's Hendon Mob all-time money list. Wahl has already tasted success here in Tallinn after winning the inaugural Coolbet Open last year.

Julius Schamburg, who already clashed multiple times with Ruijs on Day 2, was among the biggest stacks to be gobbled up today. Schamburg tried to make a stand against his nemesis' relentless attacks, but an ill-timed four-bet shove with ace-five was met by a snap-call from Ruijs with pocket jacks. The jacks held up to send Schamburg to the rail in fifteenth. Kaupo Tenno, Tarmo Tammel, and Pasi Sormunen also busted to Ruijs, with Sormunen being the last to go in ninth place.

Given the shortness of the day, the floor staff allowed the players to discuss whether they'd like to keep playing, but after Hannemann opted against it play was suspended until Sunday as scheduled.

PokerNews will be on the floor of the Olympic Park Casino to cover the Main Event as well as the single-day €10,200 Championship Event.