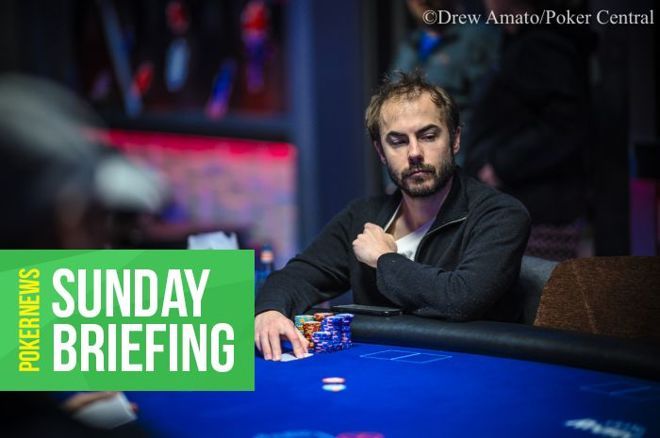 Apr. 7 threw up some big online poker tournaments thanks to the usual array of high buy-in events taking place at PokerStars and Natural8 plus the partypoker POWERFEST and 888poker XL Blizzard festivals continuing.

Elio Fox walked away with a six-figure score in the partypoker POWERFEST, let’s check out what he won and how

The Powerfest #37-HR: $500K Gtd PKO 8-Max event at partypoker attracted a field of 230 players who all exchanged $2,100 for the chance to become a champion, plus let’s not forget there were some substantial prizes on offer.

Everyone at the eight-handed final table locked up $6,472 from the main prize pool, but this high roller event was a PKO format so each elimination awarded some large bounty payments.

One of the players who chopped the $20 million guaranteed MILLIONS Online last year, Manuel “Sheparentao” Ruivo was the final table’s first casualty and he headed to the rail with a combined prize worth $13,559. Ruivo was then joined on the rail by Austria’s “onehundredeyes” and Denmark’s “x_zola25” who won their own POWERFEST event on Friday evening. This duo collected prizes of $15,941 and $19,980 respectively.

Fifth-placed Belarusian “PokerBrothersTM” actually won more money than fourth-placed “GewoonBoef” courtesy of the PKO element. PokerBrothersTM won $15,478 plus $16,964 for a combined score of $32,442 while the fourth-placed Dutch player’s total haul weighed in at $30,218.

Next to bust was “BITMEXREKT” who hails from Taiwan. Their prize was $40,254 when bounties were taken into consideration. This exit left Elio “donzledubru” Fox and “MinusEve” of Austria to lock horns heads-up, but it was the wily Fox who emerged victorious, banking $101,098 thanks to the $41,675 top prize being boosted by $59,423 worth of bounty payments.

Another major event taking place at partypoker was the $5,200 buy-in Powerfest #36-SHR: $500K Gtd 8-Max tournament. Last week it was Sam Greenwood who took down this tournament, this week’s champion was the United Kingdom’s “SpiritDNA” who scooped $154,033.

Canada’s “FrioPequeno” didn’t last too long at the final table and crashed out in eighth-place for a $20,100 score. The Canadian was joined as a spectator by “CanadianSanta” who collected $25,326 for their seventh-place exit.

The Moldovan “nipa3p3” always heads to partypoker during their POWERFEST series and almost always gets their hands on a big prize. This series has been no different with nipa3p3 taking the $31,825 sixth-place prize.

Now it was the time for a pair of Finnish players to fall by the wayside. “PokerG1rl69” busted in fifth-place for $40,200 before “rdcrsnn” followed suit with a fourth-place finish worth $56,950.

This exit left three players in the hunt for the title. Those three became two with the elimination of “ucantrybut” of Ukraine who banked an impressive $80,400. His or her exit meant the final two players would each win a six-figure score.

“limitless” of Germany and “SpiritDNA” of the UK collided in a one-on-one battle and it was the UK-based grinder who emerged victoriously. Second-place was worth a cool $110,550 but the champion took home $154,033 for their victory.

The attendance of the PokerStars $109 Sunday Million may have fallen yet again, as it has done every week since reducing the buy-in from $215, but more than 10,000 players still turned out for it and the $1 million guarantee was surpassed by $31,600.

All but one of the nine players at the final table secured a five-figure prize with only “LuckyNrOneAA” of Romania missing out; they banked $7,694 for their ninth-place finish. Another Romanian, “stan_09319” fell in eighth-place for $10,701 before Argentina’s “Polcito666” and another Romanian in “KidPokerSV” crashed out for scores of $14,884 and $20,701.

Brazil’s “rpl1973” became the fifth-place finisher to turn their $109 investment into a much more substantial $28,791 and they were first joined on the rail by “Kazeev S.S” of Russia who banked $40,043 then by another Russian in the shape of "SG_Sergant” who collected $55,692 for their third-place bust-out.

Despite there being more than $30,000 difference between first and second place, there was no deal struck by the last standing duo. This meant when “Boss BL” busted in second-place, they padded their bankroll with $77,457 but “Matze 90451” took the $107,737 top prize back to Austria.

Once again the $2,100 Sunday High Roller final table was a sight to behold with any of the nine finalists being capable of walking away with the lion’s share of the prize pool.

Earlier at the final table, China’s “huang33” crashed out in ninth-place for $6,962 before Sami “Lrslzk” Kelopuro dusted off his stack to fall in eighth-place for $9,046. Kelopuro’s elimination saw everyone guarantee themself at least $11,573 for their efforts, the sum banked by Hungary’s “Wildace_hun”.

Team PokerStars Pro Igor “IgorKurganov” Kurganov was the next player heading for the exits, his sixth-place finishing netting him $15,271. Kurganov was joined on the rail by Adrian “Amadi_017” Mateos, who finished sixth in this event last week; the UK-based Spaniard won $19,842 this time around.

This left Ferreira and Romanovsky to fight one-on-one for the top prize and it was Romanovsky who once again came out on top. For someone who claims to be retiring from poker soon, Romanovsky seems to be still going strong.

888poker ran some of its traditional Sunday majors alongside the XL Blizzard festival — the PokerNews recap of the XL Blizzard can be found here — with one event being the Rake of Break Whale that had a $65,000 target this week. A field of 130 ensured the $65,000 target was hit, meaning nobody received their rake back as a bonus.

Not that it bothered “Kroat.” of the United Kingdom or Jae “NEONTIGER” Kim from South Korea who chopped this tournament for prizes of $15,750 and $14,149 respectively.

Each of the nine finalists more than doubled their $530 buy-in, with ninth-place finisher “alwayswin223” scooping $1,950 before “varonislv” from Latvia walked away with $2,275.

Uruguayan sensation Fabrizio “DrMiKee” Gonzalez padded his bankroll with $2,762 after falling in seventh-place and he was joined on the rail first by “Pradgen” of Switzerland and then “kiskutya23” who added $3,412 and $4,550 to their lifetime winnings.

Sweden’s “Juliangard” then lost their chips to exit in fourth-place, a finish worth $6,175 and was joined on the sidelines a short time later by the first of two British players “SpitOnGraves”; third-place was worth $9,100.

The final six players received a four-figure prize with “pavkom” of Russia being the first player to lock up this amount, namely $1,075. The Russian player was followed by Netherlands’ based Alessandro “Wadolchimonj” Sarro who collected $1,290 for his fifth-place finish.

Forty-seven players competed for a slice of the $223,250 prize pool in the Sunday Blade $5K. Only the top six finishers received prize money and it was Canada’s “PyramidOfSkulls” who was the first player in the money, falling in sixth-place for $10,677.

They were joined on the payout screen by “ExclusiveA” from the Netherlands whose fifth-place finish was worth $15,896. The prize money exploded with fourth-place and $23,666 going to high stakes regular “NOMAMES” of Mexico before Canada’s “Picasso16” lost their chips to fall in third-place for a $35,235 prize.

Another big tournament was the Sunday Blade $2.5K, which, as the name suggests, cost $2,500 to enter. Some 60-entries were processed and a $142,500 prize pool created, almost double the advertised guarantee.

Colombia’s “HogFish333” was the first recipient of prize money, namely $5,225 for their eighth-place exit and then “PyramidOfSkulls”, fresh from a sixth-place finish in the Sunday Blade $5K, busted in seventh-place here for $6,906.

“FailBassLuck” of Hungary secured a $9,128 payout when they busted in sixth-place meaning “Joe_cizzy” from Austria was the first player to net five-figures after collecting $12,066 for their fifth-place bust-out.

Fourth-place went to “TexasPete” for $15,949 and this left a trio of Canadians fighting for the title and the not-so-small matter of a $44,278 top prize.

Tim “TEET1ME” Cramer crashed out in third-place for a $21,081 score, leaving “FkTheseGuysBro” and “SasukeUchiha” to battle it out one-on-one for the tournament’s largest prize. It was the latter who emerged from this fight relatively unscathed and with $44,278 now in their account; FkTheseGuysBro walked away with the $27,865 consolation prize,