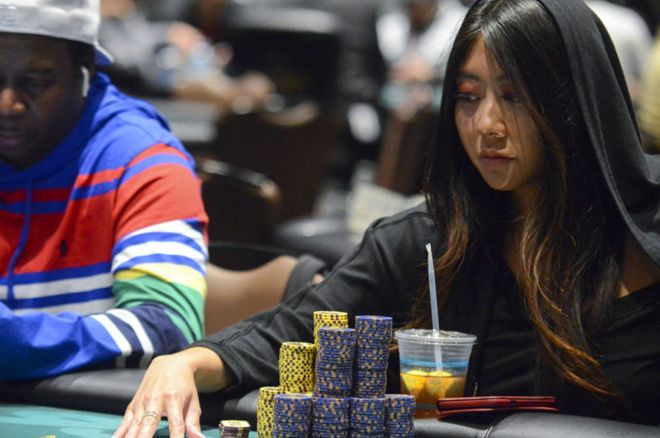 While a few postlims are still drawing breath at Seminole Hard Rock Poker Showdown in Florida, the big events are in the books — or, in the case of the $3,500 World Poker Tour Showdown Championship, as close as they can be for the time being. Two marquee events wrapped up on Tuesday at the Hollywood venue, with the Championship reduced to six players who comprise the delayed final table and the $25,500 High Roller crowning a winner.

The Championship, which drew 1,360 entries, is down a final six in contention for the $700,175 first-place prize. The headliner of the bunch is Maria Ho, popular player and sometime commentator who has put together more than $3 million in tournament cashes but has found a major tour title elusive. She sits second in the counts with more than 100 big blinds, trailing only James Carroll.

In the $25K, meanwhile, two-time WPT champion Aaron Mermelstein topped a field of 99 entries to snag $618,955 in first-place prize money, after slightly flattening out payouts heads up against Alex Foxen.

The $3,500 WPT Showdown Championship sported a hefty guarantee of $3 million, but the event easily eclipsed that mark, surpassing $4.3 million in the prize pool with its 1,360 entries across a couple of starting days.

There would be 170 places paid with Matt Waxman, Dylan Linde, Sam Panzica, Anthony Zinno, Darren Elias and Erik Seidel among the many notables in the money.

Former NFL star Richard Seymour made a deep run into the final day but petered out in 15th place. According to the live updates, Seymour dwindled to six big blinds and then ripped in with

but couldn't overcome the

of Ami Alibay despite flopping two pair as Alibay flopped top two. The $29,690 is Seymour's third-biggest cash and 15th is his highest placing in a WPT Main Event, besting his 18th place at Five Diamond in 2016.

By the time the tournament reached the final table, Carroll held a sizable lead after getting big value against Ryan D'Angelo with ace-king on an ace-high board. Ho would take D'Angelo's last few blinds with eights against ace-king to reduce the field to eight.

Two-time WPT champ Eric Afriat was one card from elimination with just two outs when he got tens in against kings but found himself hitting a life-saving ten on the river to survive. He was nearly out the door a second time a little after that when he got

but was in rough shape against the

of Alibay. Afriat made his flush on the river to survive.

Instead, it was the first player Afriat victimized, Dan Chalifour, who busted in eighth. Chalifour four-bet shoved

It would take 30 more hands before Jason Marshman bubbled the official final table. Marshman had 12 big blinds when he ripped in with

and Ho called from the big blind with

flop paired both but Ho's jacks were best and held up through the turn and river.

Both Carroll and Ho roll into the final table coming off big results.

Carroll just chopped a big Venetian event for $184,707 in February. He followed that up with a seventh-place finish in the WPT L.A. Poker Classic for another $155,900.

The remaining six players return to the felt May 30 in Las Vegas at the Luxor HyperX Esports Arena to play down to a winner. Everyone has $148,380 locked up, and here's a look at the complete table of remaining payouts:

Players toasted in the Main Event by April 15 had the opportunity for a little high-stakes redemption in the form of a $25,500 High Roller with a $2 million guaranteed prize pool. The mark was eclipsed once again as 99 entries turned out to make a prize pool over $2.4 million.

Sixteen players made Day 2 with 14 places paid. Ray Qartomy and Jonathan Jaffe would be the unfortunate pair bricking the payouts, the latter busting on the bubble when he five-bet ripped

into Alex Foxen's kings, according to the live updates.

By the time the final table of nine was reached, nobody had much of a stack as everyone was under 40 big blinds, so it was looking like a bit of a crapshoot. That changed early on when Joe McKeehen coolered Brandon Adams with aces over ace-king to surge past 60 big blinds and send Adams out in eighth.

Mermelstein picked up some momentum with six left. He doubled through Foxen with top pair over second pair, then he all but busted Niall Farrell with nines over ace-queen in a large flip to get just under 50 bigs.

McKeehen then crippled Shannon Shorr before he busted in fifth and followed up by busting short-stacked James Calderaro in fourth.

However, McKeehen would bust out in third when he three-bet shove

over Mermelstein's button open only to have Foxen wake up with bullets behind him.

Mermelstein had a small lead over Foxen heads up, and it appears at some point a deal was struck as final payouts were altered from the original structure. Eventually, Foxen flopped top pair on

only to find himself drawing almost dead against Mermelstein's top set. No runner-runner would save Foxen, who settled for an adjusted payout of $545,000.

Mermelstein said afterward it was his first cash in a $25K and he nearly skipped the event altogether.

“I busted the Main Event in pretty brutal fashion,” he said. "I wasn’t even sure I was going to play so I’m glad that I did. It worked out well.”