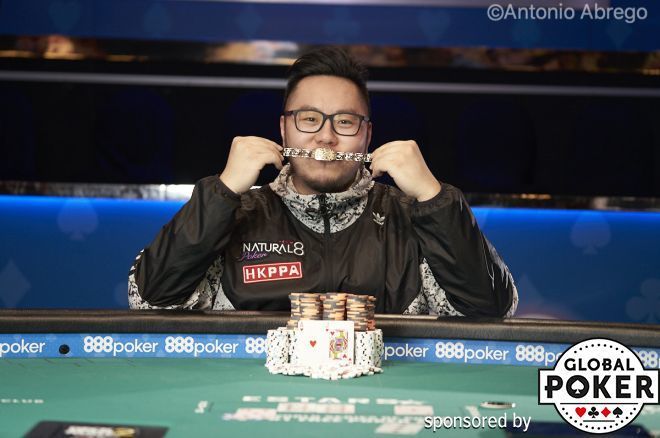 In early June with the 2019 World Series of Poker in full swing, a 90th bracelet event was added to the schedule for the 50th annual WSOP with this Final Fifty looking to bookend another successful WSOP. The Event #90: $50,000 Final Fifty has now concluded with Hong Kong's Danny Tang topping the 123-entrant field to capture his first WSOP bracelet and the $1,608,406 first-place prize after defeating some of the best high roller players in the world.

With Tang's victory, he is now the second WSOP bracelet winning from Hong Kong after his close friend Anson Tsang won the €2,200 Pot-Limit Omaha 8-Max event at the 2018 WSOP Europe in Rozvadov.

"It means absolutely everything. Being one of the ambassadors for Hong Kong and Asia, and to just win the first bracelet in Las Vegas in a No-Limit Hold'em event. It's just unreal. Words can't describe it," exclaimed Tang when discussing winning Hong Kong's second WSOP bracelet.

The Day 1 chip leader in Seth Davies managed to reach his second-lifetime WSOP final table, but his run would end in eighth-place.

With just seven players remaining, the decision was made to halt play for the night so that the players could return the following day under the bright lights of the mini-feature table where the conclusion of the Final Fifty would be aired on CBS All Access and PokerGO.

Once play was underway on Day 3, a short-stacked Keith Tilston found a double through Australian Michael Addamo, while Danny Tang put a dent in Brandon Adams' chip lead when he flopped trips. Addamo managed to double back through Tilston, and Tang flopped a set of eights to take the chip lead.

Ali Imsirovic was eliminated in seventh-place when he shoved with ace-eight and was called by Adams holding queen-five. Both players flopped a pair, while Adams improved to two pair on the turn to eliminate Imsirovic.

Sam Soverel collected a double of his own as Adams claimed back the chip lead, and then increased on it eliminating Adrian Mateos in fifth place when the Spaniard shoved a suited jack-eight from the small blind, and Adams found queen-jack in the big blind and flopped a queen to send Mateos to the rail.

Tang made his move up the leaderboard in a pot against Adams. The player from Hong Kong floated the flop with a double gutshot and turned top pair and check-called another bet from Adams. Both players checked the river, and when Tang’s top pair was enough, he moved up to seventeen million in chips.

With chips circling between the four players, Tang slowly extended his lead and began applying the pressure. He shoved the button, and Brandon Adams called all in from the big blind with ace-jack suited to be trailing Tang’s ace-queen. The board ran out nine-high, and Adams was eliminated in fourth place leaving Tang holding over eighty percent of the chips in play.

Michael Addamo eventually fell in third place when he called all in from the big blind with a dominated king. When he was unable to complete his straight draw, he left the Final Fifty down to its final two combatants.

Tang held a sizeable chip advantage entering heads-up play against Sam Soverel. Following a few shoves from each player, Soverel collected a double when he called all in holding ace-ten against Tang’s suited queen-three.

I am relatively new to the [High Stakes] community, and it's the first No-Limit Hold'em bracelet for Hong Kong. It's a dream come true."

Once play returned after the break, the two players exchanged chips back-and-forth before Soverel shoved the button holding ace-three and Tang quickly called holding a suited ace-jack. The flop brought a potential chop with a pair of tens on the board, but Soverel took the lead on the turn hitting his three. The river, however, counterfeited Soverel when it fell an ace to give both players aces and tens, but Tang the superior kicker to eliminate Soverel in second place and award Tang the WSOP bracelet and title of Final Fifty champion

"I think in general in the high stakes community, a lot of people have won a bunch of stuff, whereas I am relatively new to the community and it's the first No-Limit Hold'em bracelet for Hong Kong. It's a dream come true."

With Tang’s victory in the Final Fifty, he collected the $1,608,072 first-place prize to go along with his first WSOP bracelet. Tang joins Anson Tsang as the only WSOP bracelet winners from Hong Kong, and with his victory, Tang moves into second place on the Hong Kong All-Time Money List with nearly $6.1 million in lifetime tournament earnings behind only Stanley Choi ($7,768,875.)

"Playing poker obviously is my passion, and financially has helped me where I'm at right now. I want to go down in the history books. I just want to be remembered. When I'm older I can tell my kids, and generations and generations after me when they talk about poker, 'Oh yeah, Danny Tang', so I will be aiming for that number one spot eventually." stated Tang on his quest for overtaking Choi before concluding, "And I'm only 26/27, so I have years ahead of me. I'm confident."

"I want to go down in the history books. I just want to be remembered."

Congratulations to Danny Tang on winning his first WSOP bracelet in Event #90: $50,000 Final Fifty, and the $1.6 million first-place prize.

Stay tuned right here to PokerNews.com as we continue to provide live coverage of all the events from the 2019 World Series of Poker.