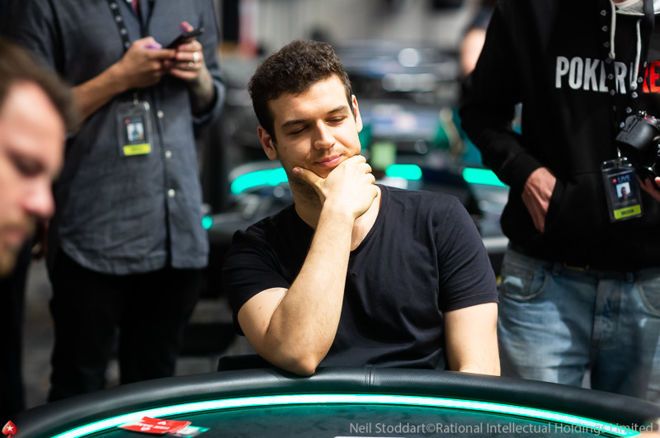 The 2019 World Championship Of Online Poker (WCOOP) is in full swing, and dozens of players from around the world have helped themselves to massive prizes. Several six-figure scores have already been awarded, but nobody has won more from a single tournament than Michael “imluckbox” Addamo (lead photo.)

Addamo is an Australian who currently resides in Thailand. He is also the recipient of the largest 2019 WCOOP prize so far. Addamo was one of 272 entries in the WCOOP-13-H: $5,200 NLHE High Roller and helped create a $1,360,000 prize pool that was shared among the top 35 finishers.

Team PokerStars Pro Igor “IgorKurganov” Kurganov was the unfortunate soul to bubble, falling in 36th place. Kurganov’s exit locked up a $10,910 cash for the surviving 35 players.

The likes of Dominik “Bounatirou” Nitsche, Justin “ZeeJustin” Bonomo, Benjamin “bencb789” Role, and Francisco “Tomatee” Benitez all received prize money for their efforts, the latter busting the final table bubble and walking away with $22,110.

Any of the nine finalists would have made a worthy champion. Ninth-place was as far as “jobetzu” would progress; they collected $27,979. Croatia’s “iamful” was the next casualty and won $36,952 before Denmark’s Simon “IgorKarkarof” Ronnow busted and banked $48,801.

Recent British Poker Open champion Lucas “YRWTHMELTHR” Greenwood fell in sixth-place for $64,451 and was joined on the rail by Anatoly “NL_Profit” Filatov whose $85,119 prize was the last not to be six-figures.

Netherlands’ Luuk “pokerkluka” Gieles banked $112,416 for his fourth-place finish with the penultimate bust out being that of Claas “SsicK_OnE” Segebrecht who netted $148,465.

No deal was struck heads-up despite the difference in prize money being almost $63,000. This meant Samuel “€uorp€an” Vousden collected $196,075 for his runner-up finish and Addamo scooped a massive $258,952.

Plenty of big name pros made it into the money places, including Andras “probirs” Nemeth, Mike “SirWats” Watson and Lucas “YRWTHMELTHR” Greenwood, the latter falling in ninth-place for $27,636, busting the final table bubble as a result.

As you would expect, the final table was a star-studded affair. Brazilian pro Rodrigo “digopapel” Semeghini was the first player eliminated, and he was joined in the role of spectator by Netherlands-based British star Conor “1_conor_b_1” Beresford. Man of the moment Sami “Lrslzk” Kelopuro ran out of steam in sixth-place for $60,008 with Arseni “josef_shvejk” Karmatski falling in fifth-place for $78,689.

The first six-figure prize was awarded to “BeezNeez360” who collected $103,185 from their home in New Zealand. This prompted a three-way deal that locked up at least $166,740 for the remaining players. Austrian superstar “WATnlos” netted $166,740 when they busted in third-place before “KaraageChicken” of the United Kingdom defeated “Futti18” of Russia to become a WCOOP champion. Second-place, after the deal, was worth $182,414 with the champion turning their $5,200 into a colossal $196,251.

The Canadian remains anonymous but has some excellent results to their name. You may recall it was a.urli who won the Sunday Million 10th Anniversary tournament in 2016 for $970,000 after a four-way deal.

A special mention has to go to Samuel “€urop€an” Vousden who finished seventh for a combined prize worth $36,500. Also, to Simon “IgorKarkarof” Ronnow whose fifth-place netted the Dane $59,086.

It was the latter who emerged victoriously and scooped $250,000 while Margereson padded his bankroll with $178,245 in total.

Some of the other huge WCOOP scores awarded so far include:

Stay tuned to PokerNews throughout the WCOOP as we bring you details of the biggest, richest online poker tournaments in the world.

Discover the Age of the Gods Saga with 20 Free Spins