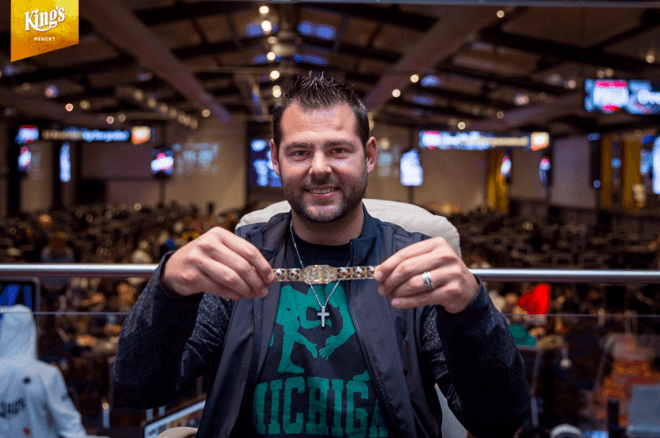 The World Series of Poker Europe kicked off a few days ago, and the first four-card bracelet has just been awarded. Only six players returned to the felt today for Event #2: €550 Pot-Limit Omaha and Michigan player Dash Dudley reigned victorious to capture his second bracelet along with €51,600 ($57,410) in prize money.

Dudley, who has been around the poker tables since 2002, claimed his second bracelet after his victory in the $10,000 Pot-Limit Omaha last summer that earned him a healthy $1,086,967.

"I've been there before. I was also shorter stack with three left in the final table I won. I stayed patient I believe, and good things happen. Definitely really blessed, I got a lot of support behind us, got a lot of people back home cheering for us so I felt like I had a really big team."

Dudley entered the final table fourth in chips and managed to survive through many ups and downs throughout the day. It wasn't an easy final table by any means for the PLO cash game specialist, who dropped down to as low as seven big blinds in three-handed play after he lost a few pots to Denis Drobina.

Dudley doubled twice in quick succession against Drobina a few moments later to claim the lead at three players left, leaving Drobina with crumbs. The latter pushed his last three big blinds in the middle and got eliminated by Christopher Back who found a flush on the flop.

"I got a lot of support behind us, got a lot of people back home cheering for us so I felt like I had a really big team."

"My opponents were very very tough," Dudley told tournament reporters after the win. "This is one of the toughest final tables, if not, the toughest final table that I played. There were guys with a bracelet, there were players that had won PLO tournaments before. There was a lot of experience, there wasn't really any soft spot at the final table. Everyone was really experienced and it was cool to play with people from all over the world. I think I was the only guy from the U.S. that made the final table. It was a very diverse final table and it was fun playing with some different styles."

With a significant lead from Dudley, the heads up lasted not even half an hour. In the final hand, Back found himself all-in on the turn with a gut-shot straight draw and was in desperate shape to double up, facing a straight for Dudley. The river bricked off as Dudley secured his second piece of WSOP gold.

"I feel great. The heater is officially real. They said when you go on tournament runs they kind of come in bunches so I decided to come over here and try Europe for the first time. It's actually my first time playing outside of the United States so it was a really cool experience, just totally blessed for this opportunity."

Dudley, who had a packed rail last summer, is already preparing for his next PLO tournament and feels grateful for the support he receives from his friends and the poker community, which helps boost his confidence.

"I'm from Lansing, Michigan. I'm proud of my state and my city. I have a lot friends back home, a lot of people that have inspired my game. So I gotta give a lot credit to Michigan."

A field of 476 players was whittled down to just six after two days of play for the final table of the first pot-limit Omaha tournament of the 2019 WSOPE. For four of the players, they were in search of their first-ever gold bracelet while Ivo Donev and Dudley were looking for their second gold.

Oshri Lahmani was the first player eliminated. He started the day sixth in chips but he wasn't able to realize a comeback. Lahmani busted out in sixth place which earned him €7,850.

"I feel great. The heater is officially real."

Donev never got much going on the final table and had to settle for fifth place for €10,900. His pocket jacks ran into Dudley's aces, which improved to a full house. He was followed by Ming Juen Teoh, who moved all in on a king-high flop with top pair while Back had the flush draw and hit it on the river.

Down to the last three, things looked bad at first for Dudley as he dropped down under ten big blinds. However, he quickly doubled up twice over Drobani with two pair over pair and with a straight versus two pair to take over the lead.

Dudley took down a few pots to increase his lead during the heads-up and finished the job in less than one level before celebrating bracelet No. 2 with his girlfriend on the rail.

That wraps up coverage of Event #2: €550 Pot-Limit Omaha at the King's Resort. Stay tuned for updates on all the remaining 2019 WSOP Europe gold bracelet events right here at PokerNews.