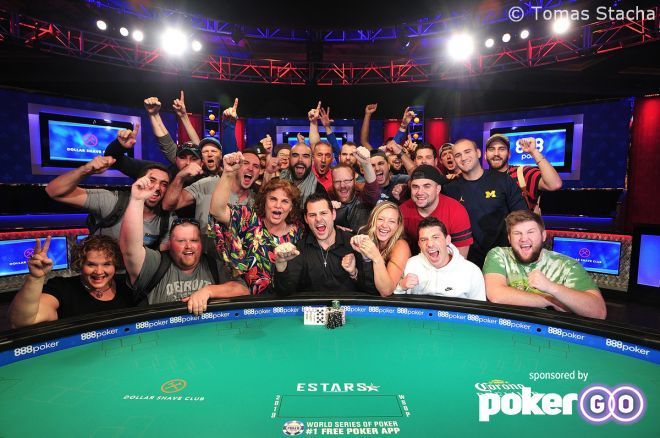 A new millionaire and maiden bracelet winner has been crowned at the 2019 World Series of Poker as Event #52: $10,000 Pot-Limit Omaha Championship drew to a conclusion after four-and-a-half levels on the final day. The main feature table in the Amazon Room of the Rio All-Suite Hotel & Casino set the stage for the PLO specialists to determine their champion out of a massive field of 518 entries, which created a prize pool of $4,869,200.

Ultimately, it was Dash Dudley from Lansing, Michigan, who went wire-to-wire and claimed his first WSOP bracelet, which came with a payday of $1,086,967. Dudley was supported by a boisterous rail including fiancé Racquel, and that support lifted Dudley on his way to victory.

His mother Kimberly was also there and Dudley credited her as the main reason he got started in poker.

“It is kind of a funny story," he said. "She used to have a game way back when I was 13, 14 years old. They played dealer's choice, I watched for quite a bit and finally, I decided to jump in and try it out... and they crushed me. They were playing no-limit seven-stud — it may be the only no-limit seven-stud game in the country.”

While Dudley started the day with the chip lead, it wasn't a walk in the park by any means for the PLO cash game player, and he dropped down to as low as eight big blinds in three-handed play. Two quick double ups in succession put Dudley back on track and every pot he raked in was met with frenetic applause from his rail.

"I even said, 'it is no more min-cash Dash' as I was playing for the win"

Dudley said he was well-prepared due to extension short-stack experience, which resulted in a bit of an unfortunate nickname.

"People have been making fun of me," he said. "I even said, 'it is no more min-cash Dash' as I was playing for the win."

His rail featured plenty of poker players like Nick Guagenti, and they were definitely the most vocal throughout the entire final table, which in return helped to boost the confidence of Dudley further.

"I got a lot of people in my corner," he said. "I got great support here, all my friends and a lot of people back in Michigan cheering for us. It definitely feels good when I am sure to have all those people behind me.”

Dudley started heads-up with British PLO specialist James Park dead even in chips with more than 30 big blinds at their disposal, yet it only took half an hour to determine a champion. Australia's Joel Feldman finished in third and the two former WSOP Main Event finalists, Jeremy Ausmus and Eoghan O'Dea, had to settle for fourth and sixth, respectively.

"The field was surrounded with killers, some of the best players in the world and I really just focused on isolating them and trying to get them in bad," Dudley said of his strategy. "There were some phenomenal players and it was really a challenge at every table, especially when we got deep the field was very tough."

Dudley has been around the poker tables since he went to college back in 2002, with his first WSOP result dating back to 2010 in hold'em. Since then, he has almost entirely cut out two-card from his schedule.

He said latching onto PLO earlier than most helped him as he's gotten to see the game evolve. He admitted the competition nowadays is fierce, and said constant work is necessary to stay afloat since many players are improving in his game of choice as it gains popularity.

Dudley prides himself as a PLO specialist, however, but he hardly plays tournaments anymore and mainly focuses on the cash games. The rare exception to take a shot at a gold bracelet in Las Vegas turned out to be spot on, as he walked away a millionaire and latest member of the WSOP bracelet winner's club.

He may also take another shot at glory in the upcoming $10,000 Pot-Limit Omaha Hi-Lo Championship, but that rather depends on his poker friends on the rail.

“A lot of the guys on my rail are very good at that game," he said. "I could use some more time talking to them before I jump in there. However, I gonna enjoy this for a minute, take a little break and not worry about getting the low.”

Want to watch the WSOP LIVE? Sign up for PokerGO!