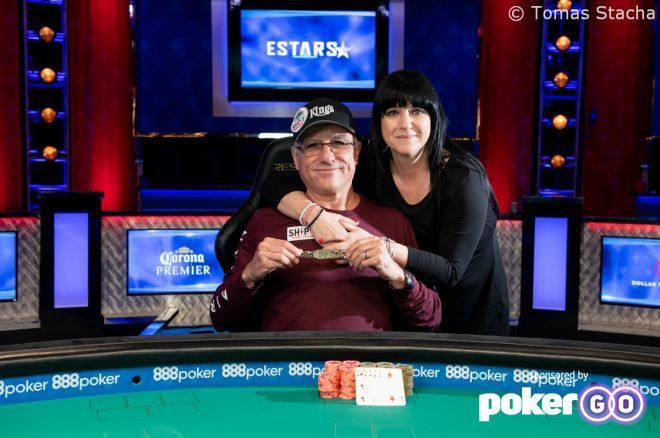 He joined a list that includes legends of the game like Bobby Baldwin and Puggy Pearson as well as more modern dominators like Shaun Deeb, Brian Rast and the Mizrachi brothers.

It's Elezra's third bracelet in a stud variant and his second in this event, which he also won in 2015 for $112,591. He felt so confident going into the tournament that he said he predicted victory on a recent vacation.

Elezra said his vast experience in stud gave him a wealth of confidence going into the final table.

"I saw more [stud] hands than everyone who played with me," Elezra said. "And as I say, stud loves me back."

In fact, Elezra had to contend with some fellow mixed-game veterans as Scott Seiver, Rep Porter and David Singer all made the final table. However, although the latter two made the streamed final six, none had any chips to work with.

"I saw more [stud] hands than everyone who played with me. And as I say, stud loves me back."

Elezra, on the other hand, ran like hot fire at the end of Day 3 to bring in a mountain of chips along with Anthony Zinno, while everyone else ranged from ultra-short to middling. Elezra wasn't shy about admitting how heavily the deck was stacked in his favor in that Day 3 surge.

"Out of eight hands, I make six straights and I pick up aces. So, it's brainless. Once you make straights against people who have two pair or whatever, you're gonna get huge chips."

Get a huge stack he did, and it seemed inevitable the bracelet would come down to him against Zinno heads up. While Valentin Vornicu hung tough for awhile and battled three-handed, that's exactly what occurred when Elezra finished him off a few hours into the final table.

While Zinno has shown himself to be a solid competitor at the WSOP even away from his pet no-limit events, Elezra highlighted the vast difference in their stud experience.

"He's one of the best players out there but I told him he's short, I'm about 30 years above him in stud," Elezra said with a smile. "He just started playing about five years ago in stud."

Zinno proved a tough out as he battled from a sizable deficit into the lead. The match lasted several hours and involved several lead changes.

Elezra admitted he felt a little pressure and got a bit steamed up when Zinno evened things up and then edged past him. He had to calm himself and trust what he called his old-school instincts.

"I still got it here," he said, patting his gut. "I still got the feeling about hands and that's how I know when to fold and when to go with it."

Indeed, many of the most decisive hands of what was otherwise a slow match involved Elezra picking off Zinno's bluffs. About four hours into the back-and-forth battle, Elezra ended it when both players had straight draws on fourth street. Elezra made his six-high straight while Zinno bricked out a Broadway draw.

"I think in the end, I was mostly lucky because Anthony's a really good player," he said.

Keep following PokerNews as more live updates are brought from the tournament floor through the conclusion of the 2019 World Series of Poker. The next scheduled final table broadcast on PokerGO and CBS All Access is the final of the $10,000 2-7 Single Draw.